The major difference between Thursday boots and Meermin is that Thursday boots are extremely comfortable when you buy them, you do not need to break them in. While the Meermin boots need break in.

You will always have to check well to ensure the size you buy is your exact size.

When you want to compare two boots, it is usually good when you take your time to differentiate the shoes and know which one is better than the other depending on your usage.

In this article, I will dive deeper and explain what you need to know about Thursday boots Meermin boots.

What are Thursday boots?

It came out of the frustration of wearing too many bad work boots that often tear apart after it has been worn a few times. Or boots that are usually overpriced and do not perform as expected.

Thursday boots are located in New York City. It started in order to solve the problem of ridiculously high-priced boots that are inefficient. Thursday boots are known to produce high-quality boots at honest prices.

Thursday boots are not only comfortable and efficient boots, but they are also fashionable. Now that you know the history of Thursday boots, let me also take you through the pros and cons of the Thursday boots.

See some of the amazing shoes by Thursday boots.

You can also read more info about Thursday boots:

What are Meermin boots?

Meermin was established in 2001 in Spain. Meermin makes a couple of boots but they are known best for their boots.

The company was founded by a well-known family which was the third and fourth generation of a shoemaker family from Mallorca.

Meermin has a goal of producing high-end shoes that come at a reasonable price for the customers.

When Meermin boots are being produced, they always pay attention to details and ensure that the boot has a very sleek design.

This sleek design is one thing that attracts people to buy the boot and it is also one of their selling points.

Meermin boots may not be the most comfortable of all boots, but they are really excellent when it comes to design and aesthetics.

If you are the type of person that pays attention to details and aesthetics, you should go for this boot because it has very good designs and also adds some level of attraction when you wear the boots.

I will also take you through the pros and cons of this boot. This will help you see the good side and the other side you may not really like.

Check out some of the amazing shoes made by Meermin. 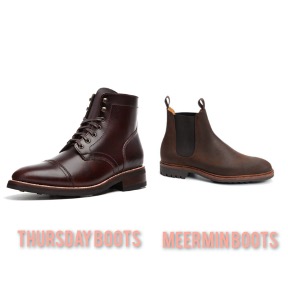 Most times, when you want to compare two types of shoes for you to be able to choose your best, you will notice that there are some similarities that these two shoes share.

It is a good thing for you to know what the similarities are. That is what I will explain in this segment of this article.

They both have a good grip

This is one common feature you will get to see a lot in boots. Boots are known to have a very good grip.

This is because boots are made to handle tougher jobs while keeping your feet protected at the same time.

Thursday boots have soles made with studded rubber, while Meermin boots are made with classic round HIRO last which was finished with double rubber.

They both can be used as dress shoes

Even though the Thursday boots are best for work and tough tasks, they can also be used as dress shoes, and this is a good thing. The same thing is applicable to that of the Meermin boots.

In fact, Meermim boots do the work of dress shoes better. This is because of the stylish build and design the boots come with. You can easily wear them as dress shoes.

They both have durable leather build

They both have removable insoles

The removable insole of the Meermin boots is fully lined with a full-grain calf. With this you expect the insole to be removable for you.

The same thing is applicable to that of the Thursday boots.

When you take a look at these different shoes, the thing you notice first is how the shoes look and their appearance.

Earlier in this article, I mentioned that Meermin boots have a more stylish, refined, and sleek look at first glance.

You will also see that the Meermin boots are narrow around the toe, this is why you need to break in the shoe when you get it. Especially those who have wide feet.

This is one major difference you will notice between the two boots when you take a look at the boots. Thursday boots are built for workers and it comes with the workers’ design and aesthetics.

Thursday boots are made of full-grain leather material. This material build is known to be a durable one and the fact that Thursday boots have workers build, design, and aesthetics.

While that of the Meermin boots are sleek and stylish and made from french leather material. This material does look obviously better than that of Thursday boots.

One feature that determines how durable a shoe can be is the material build that It comes with. While that of the Meermin boots come with a french leather build.

However, this material offers quite the same level of durability as that of French leather.  It is clear that this is a tie, both are very durable boots

One thing that determines how much shoes are bought by customers is how much the shoes costs.

When shoes cost too much, even though they offer the best quality, they may not be affordable by the majority of those who need them.

Meermin boots are usually priced around $200 – $320. Compared to the Thursday boots which start at above $300.

The clear winner here is the Meermin boots.

When comparing shoes, you should by no chance leave out the insoles. The insoles play a major role in how comfortable the shoes will be when you wear them out.

The insole is removable, it was made in such a way that it was covered in sheepskin. This adds comfort for you each time you wear it out. The Meermin boots are not left out.

The removable insole of the Meermin boots is fully lined with a full-grain calf. You cannot clearly say which is best when it comes to insoles, the insoles are both removable and also have good quality that makes them comfortable for you each time you wear them.

The two boots are quite different when it comes to sizing and fit. Meermin boots have a narrow build towards the toe area, this makes it difficult for those with wide feet to find the shoe comfortable.

Usually, when you wear Meermin boots, you need to break them in. But the situation is different for the Thursday boots. When you purchase Thursday boots, you would see that they are comfortable even right from the box.

When you wear Thursday boots you don’t necessarily need to break them in because they come comfortable right from the box. The clear winner here is Thursday boots.

Which is better overall?

For you to pick which one is better overall, you have to first ask yourself what exactly are you looking for in these boots.

Are you looking for boots that you can buy and wear immediately that you can wear for work mostly, then you should go for the Thursday boots.

On the flip side, if what you are looking for is something fashionable and that you can wear to a variety of events, and if you will not be doing so much work with it, then the Meermin boot is that.