Meermin and Allen Edmonds shoes have been around for a very long time. They have many fans and are known for their quality.

The major difference between Meermin and Allen Edmonds is that Meermin produces more modern European styles while Allen Edmonds goes for the traditional USA look. 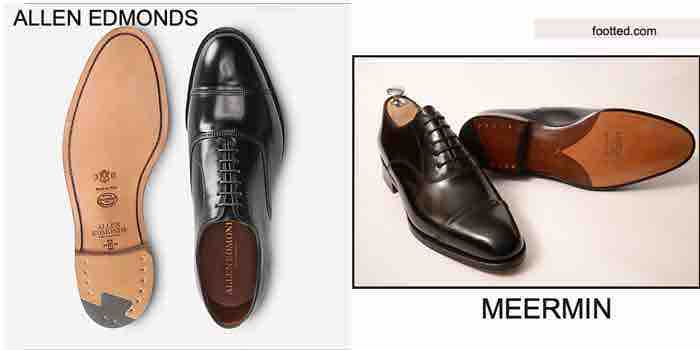 Also, while Meermin has the quality and is affordable,  Allen Edmonds is a luxury brand giving that classic look. There is also a difference in the price at which they are bought.

Allen Edmonds quality is worth the high price whether newly bought or second hand. Meermin on the other hand has very low prices that have very little relation to the wonderful quality it offers.

The prices for Meermin shoes are associated with durable shoes yet the quality of Meermin shoes will place till beside Thursday boots and Carmina.

Which of them is better?

Allen Edmonds (the one on the left) is a luxurious brand and they have been around since 1922 they have over 50 stores.

They produce in the US and then distribute to other countries. Meermin (the one on the right) hasn’t been around that long (since 2001) but is no stranger to the shoemaking business.

Beginning on Mallorca island in Spain, the family business is now blooming although they have stopped producing in Spain due to lack of labor. They have been produced in Spain and China and are still producing.

So Meermin or Allen Edmonds? Who cuts? Who has the gold standard? Who has their perks canceling out their quirks?

After a lot of research, review assessment and reading, comparing notes, graphs, charts, sizes and everything to what they have to offer… The better of the two is Meermin and I am about to tell you why.

If you are a newbie when it comes to shoes, you might not understand the importance of stitches on shoes. Stitches help hold all the materials and components in place.

And dare I say the structure? I do. The soles of Meermin shoes are made of leather and suede material, and they are designed closer to the upper.

They don’t stick out like Allen Edmonds. Now generally because the soles of Allen Edmonds are made of leather and rubber, it gives it an edge over Meermin soles.

However, the design on them is bulkier than Meermin, reducing its style. It has this chunky look to it.

And then, when you come to the toe, they are both rounded but there is a subtle difference and if you look very closely you will notice that Meermin is a little more rounded than Allen Edmonds.

All these; the sole, the edge, and the rounded toe, give Meermin a nice, shapely and sleek look. Here is what I mean.

When you buy a pair of Meermin shoes, it is stiff when you first try them on. Really stiff but it breaks in easily, says after two or three wears. Now Allen Edmonds has no break-in period at all.

They are that good but I promise you, they do not have that feel and snug-fitting that Meermin shoes have. Besides that, you can find Meermin shoes under $300 for good quality.

Differences between Meermin and Allen Edmonds

Here are some differences between Meermin and Allen Edmonds.

Allen Edmonds shoes have always been produced with calfskin of premium quality. This way it can maintain a standard. Meermin gets its leather from Japan, and some European countries like France, the UK, and Italy.

Yes, they go that far to ensure that your shoes are made of substandard materials. Unlike Allen Edmonds that are produced in the US, they are produced in China. They make use of suede material too.

They sell online allowing contact with the customer, eliminating middlemen and their distribution fees making it cheaper.

Allen Edmonds shoes are made according to the traditional USA dress shoes. They are accepted that way and the quality is a sort of sympathy to those who want something more modern. Over the years they have become a classic.

While Allen Edmonds has other brands like Park Avenue and Addison Penny, Meermin makes Chelsea boots and loafers and they also produce handmade belts.

Allen Edmonds are Goodyear welted shoes. They have over 200 steps on the entire production process, each done with precision, care, and dexterity.

According to traditional USA dress shoes, they are made with a 360 degree Goodyear welted method round the perimeter of the upper.

One feature of Allen Edmonds is that the whole shoe is held together with the welt and the sole. This makes it lighter, easy to move in but that is also what is responsible for its stuffed, chunky look.

Allen Edmonds is also hand-sewn shoes but if you are out for quality, it’s best if you go with the Goodyear welted shoes. The hand-sewn variation is not exactly their specialty.

As for Meermin, they use the 270 degrees Goodyear welted method and this is applied only from the forefoot to the midfoot, the welt line is visible. this method gives it a sleek look.

The downside of this process is that it is time and labor-consuming. Most people don’t want to learn and you can only go as far as three pairs a day in terms of production.

They cost a little more than Meermin shoes produced with the Goodyear welted method.

Ahh, the key difference. Most people would argue that since Meermin has low prices and great quality, they would be more in demand than Allen Edmonds. Wrong.

You see, Allen Edmonds is a luxury brand. The name alone tells. That’s why it’s pricey and has great quality. It has a design and style that is second to none. Since it is produced in the US, shipping fees and delivery charges to other countries make it more expensive.

Meermin is not a luxury brand, it just produces regular shoes. The reason the prices are so low is that it doesn’t produce a lot due to scarcity of workers and the little they produce is not sold wholesale.

It can only be purchased on their online store without middlemen at retail quantities and prices. This way the price remains low and consistent. It has been like that over the past five years.

Due to the difference in location of production, the sizing is different measurements. Meermin sizes are 6 to 12 in UK measurements when Allen Edmonds are 5 to 16 in US measurements.

Normally this shouldn’t be a big deal as you can easily convert one type of measurement to another. Notice that Allen Edmonds has more sizes available than Meermin.

If I want to do a family picture I am more likely to find sizes for the whole family and relations if I am going for Allen Edmonds.

And even if you have narrow feet or wide feet or odd-shaped feet, Allen Edmonds is here for you with their sizes as small as AAA for each type of feet to as high as EEE.

Any similarities between Meermin and Allen Edmonds?

Here are a few things that these two shoes making brands share:

Even though they employ different materials gotten from different sources in making their shoes, they are both of premium quality.

Allen Edmonds uses high-quality calfskin that is very soft and comfortable while Meermins are made of French calfskin that needs a break-in period of two wearings.

No part is taken for granted, and every type is involved in either loafer by Meermin or the Dalton Wingtip and Strandmork Brogue brands under Allen Edmonds. Even laces!

The result of well-made shoes. They both last roughly 10 years if they are well taken care of. The soles and material used are of great quality, they are also durable.

Meermin soles are made of suede material and leather while Allen Edmonds are single leather soles. They are doubled to give a different, heftier look.

Allen Edmonds has more favor when it comes to soles because they will last longer but it doesn’t mean that Meermin will just fall apart.

The two have it in the bag when it comes to designs. Allen Edmonds style is in alignment with the traditional USA dress shoes and since it is becoming older and older and made by fewer producers, it has become a classic, luxury item.

Meermin is known for its sleek and shapely look and style. In going for regular everyday shoes like loafers and boots, they will be the number on everyone’s list for making regular footwear a gold standard.

Why should you buy Allen Edmonds over Meermin?

We have compared and contrasted the two shoemaking brands. So if you were to go for Allen Edmonds, what do you get over Meermin? To begin with, the sizing advantage.

Even as a luxury brand, Allen Edmonds is producing shoes that will fit elves and giants alike. That consideration alone means that you can never go shopping for Allen Edmonds and return empty-handed because of the size.

Another thing is the fact that Allen Edmonds is a luxury brand. If you want to show off your money, get these. You will stand out and stand tall, mostly because of the double leather soles though.

If you are financially buoyant and you have a thing for Allen Edmonds, get them. You will also be sure that you are getting the value of your money.

Lastly, consider the fact that they have zero break-in time. Buy, slip your feet in and start the journey like old friends. There is no getting to know and trust your phase like Meermin.

Why should you buy Meermin over Allen Edmonds?

Yes, we all agree that Allen Edmonds will make you think of wall street, but Meermin will put you in the fashion hall of Fame. They have a wide range of styles and designs and you won’t look stale in those pricey dull Allen Edmonds.

Remember when I talked about them selling directly to their customers online? Well, that has multiple advantages. Aside from the fact that you won’t deal with so many middlemen who will inflate the price, they sell worldwide.

You can get your pair by interacting with them directly. This way will understand your foot needs and will be able to give you what you need. Coupled with this is the customer support system that remains unmatched.

When it comes to Meermin, you can easily customize it to suit your taste. Ain’t that cool? This will work well for me because I don’t have to make do anymore will soon design I am not too cool with.

We have succeeded in comparing the two brands and highlighting the things about them that you will love and the things you need to know, you know, their quirks.

I hope this article was very informative. Do leave your questions and comments in the comments section below.