Vans is an American producer of sleek and comfy skateboarding footwear that was established on March 16, 1966, by two brothers who collaborated at a family-owned rubber manufacturing company and merely wanted to display their twist on skateboarding shoes.

The Asher is a Vans model that takes its design cues from classic Vans. The Asher is a slip-on Vans shoe with a stylish and portable contour.

The Asher and Classic Vans slip-on are nearly indistinguishable, but there are some notable and telling differences.

The major difference between the Vans Classic slip-on and Vans Asher is that Vans classic slip-on also has a more shaped toe area than the Asher, giving your toes more room to move. 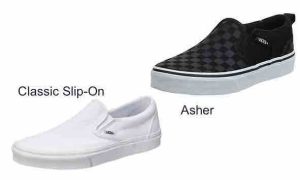 Whatever your preference, they are both fantastic pairs of shoes, and despite popular assertion, they are both Vans products. Get a pair for yourself, or buy them as a gift.

You will not be disappointed if you buy one or both of these shoes.

At first glance, we realize the preceding characteristics:

I’m not sure about you, but I think the Vans Classic Slip-On is a masterpiece. From the two-piece canvas upper to the trademark waffle outsole.

It’s difficult to tell on a mono pair, but with big props to the red and black colors, you can obviously see where the pairs reach and establish the upper.

The upper’s forepart and heel counter are black, while the mage and quarter are red. The sneakers are styled after derby shoes, with the flaps attached to the quarter to cover the tongue.

The tongue is lengthy and even has a large label with the Vans logo on it. The rear end of the outsole also features a logo design.

Double sewing holds the upper together. This method is strong and will not come loose easily. It also adds to the shoe’s design and adds a touch of style to it.

The Vans Classic Slip-On has a low vamp and heel counter. It uncovers the ankle and is ideal for wearing with ankle socks.

The eyelets used for fastening are made of metal. Metal eyelets make it easier to pull the laces through and are more long-lasting than plastic products.

The following characteristics of the Vans Asher can be seen in the image:

What do you make of the preceding list? That’s right, the Vans Classic Slip-On and Vans Asher share feature such as the rubber waffle outsole. However, it does have some distinguishing features, such as the suede upper.

Vans Asher can be made of suede or canvas. It gives it a glossy, smooth appearance. You’ll also see plenty of stitches on the upper.

Because it is not a one-piece piece, double stitching is used to hold the various pieces together to form one durable suede upper while also adding to the visual appeal.

The Asher shoe is very comparable to the Oxford shoe. Even though it is attached to the fourth of the shoe, the folds are smaller.

A double stitch separates the forepart of the upper and the vamp, equivalent to the framework of an oxford pair of shoes. This gives it a very stylish appearance.

Metal eyelets make the flaps strong and long-lasting. They also make it easier for your laces to pass through them. These shoes have a low vamp and are low-top, revealing the ankles and enabling freedom of movement.

The ambition for the Asher to be a more reasonably priced and popular option should indicate that it is less long-lasting than the Vans classic slip-on.

While the classic slip-on has uppers made of a more textile-oriented content, the Asher uppers are made from synthetic materials that are far less long-lasting than textile.

The stitching on the Asher is also unique. It has a more stylish aesthetic, which differs from the classic slip-on stitching patterns, which are much more durable.

The classic Vans slip-on is made of a very sturdy, nimble, and stretchy woven fabric that is designed to withstand any type of abuse or misuse.

It is also very lightweight because, as previously stated, leg movement must be simple and easy; using a thick and heavy material will impede movement and render it inefficient.

The material’s breathability is critical because your feet require air circulation while wearing the shoes to keep you cool from extreme sweating.

Although the Asher retains the sleek aesthetic, the uppers are made of different materials based on visual communication.

The Asher is more appealing than the Vans classic slip-on because it is available in a wider range of graphic designs and colors.

It’s also very cool because of its sleek silhouette; we can all acknowledge that smaller things are usually better looking.

The Asher’s elegant stitches also give it an eye-catching appearance that is difficult to ignore; if you like vibrantly colored and playful models on your shoes, the Asher should be an excellent choice.

I can’t speak for everybody, but I like bright colors, and the Asher has that. The classic slip-on is also available in a variety of colors.

The Asher is influenced by the classic Vans slip-on, so the layout and visual appeal are strikingly close, but there are small variations.

The classic slip-on lacks the side-stitching found on the Asher, and the Vans logo is located in different places.

The Asher features a relatively narrow and sleeker design that is perfect for people with narrower or slimmer feet.

The heel is covered with a soft foam that gives the Classic slip-on an ultra-comfortable feel; however, this design change makes the Asher less flexible than the Vans Classic slip-on.

From the spacing of the Sole framework to the waffle design beneath the sole and the frame of the uppers, the Classic Slip-On and the Asher have very similar features.

The convenience thresholds of the Vans classic slip-on and the Asher vary because the tenderness of the insoles of the Classic slip-on far outweighs that of the Asher.

The Asher, on the other hand, is lighter than the Vans classic slip-on due to its sleeker contour.

The rubberized heel of the Vans Classic slip-on also adds to the comfort level, making your feet feel like they’re getting a spa treatment while walking.

The Asher has a more restrictive and sturdy heel, which most people find uncomfortable; however, it does outweigh the classic slip-on in terms of weight, being lighter.

Because of its low weight, the Asher is an excellent choice if you are an active person or if your job requires you to be on your feet for extended periods of time.

However, this does not imply that the traditional slip-on is any less comfortable. It offers a different kind of comfort for a more subdued environment where you don’t have to move around much.

When it comes to usage and purchase, Vans fans typically opt for the Vans classic slip-on because it is regarded as one of the most important collections in the Vans Line.

The Asher, on the other hand, is designed as a less expensive and more cost-effective substitute that can be discovered in the department and retail stores.

If you value convenience overpricing, the Vans classic slip-on should be your first choice; however, if you’re looking for something in your price bracket, the Asher should be considered.

If you browse for recommendations on the Asher, you will find that the majority of them are negative, and the truth is that most of the review sites haven’t actually used the product; they just saw it in a department store and assumed it was fake, then built their viewpoints around that limited contact.

These are also good shoes with similar models but different features.

The Asher and Vans classic slip-on share a Sole, which is an organic latex sole with the iconic waffle styling.

The sole of a shoe customarily adds about 60% of the overall weight of a shoe, and because the Asher has a slimmer and more refined styling, it weighs less than the Vans classic slip-on.

The classic slip-ons are much thicker and heavier, giving it a soft feel for your feet, almost like you’re walking on fluffy clouds.

The insole also contributes to the weight distribution and overall weight of the Vans classic slip-on.

When it comes to convenience, everyone has different preferences; the classic slip-on favors a more conventional soft insole to provide comfort, whereas the Asher trades that for a lighter feel.

When it comes to the quality of the Sole, there isn’t much of a variation between the Classic Vans slip-on and the Asher.

Unlike the Asher, the Classic Vans has a Platform layout type in addition to the regular Sole.

Vans Soles are generally made of rubber, which makes them extremely durable, and the plain and well-threaded appearance aids in providing excellent traction on a variety of surfaces.

Anti-slip vans are available. This is a fair assumption for skateboarding shoes because the board is typically smooth and can become slippery.

They are both crafted of Gum-Rubber, a natural substance acquired from a type of tree that offers greater grip aid for your feet.

Vans’ slip-resistant nature is what makes them popular, and it’s visible in both of these equally impressive pairs of shoes.

The Asher is designed to be a more affordable alternative to the classic slip-on.

However, the Asher is considerably cheaper than the Vans Classic Slip-On.

As previously stated, the Asher is a little narrower than the classic Slip-On, giving it an advantage in terms of portability.

Although they appear identical and the shapes are indistinguishable at first glance, they are subtly different from the Asher on the sleeker side.

Because of its streamlined design, the Asher has a more eye-catching contour; it is slim and portable. Although it is not recommended for people with large feet.

At first glance, there appears to be little distinction between the Vans Classic Slip-On and The Asher. However, after putting them on and wearing them for a while.

You’d notice slight changes like the padded heel found in the Classic Slip-On and the extra cushioned insole found in the Asher.

If you like bright colors and like to wear audacious outfits, the Asher is a better choice.

It also arises in design options that you can have made when you buy a pair. In terms of design, the Asher edges out the classic slip-on due to its ﬂexibility and range of choices.

The Vans Classic Slip-On and The Asher have more resemblances than distinctions, which is not surprising given that one is styled after the other.

However, because the Asher is less expensive, some of the characteristics are dissimilar, as is the quality of the materials.

They are both excellent pairs of shoes, and I would suggest them both; however, they each have distinct features that set them apart in their own way.

The Asher is the top pick for a playful and vibrant appearance; if you prefer a classic design with a well-cushioned insole and convenient feel, the classic slip-on is for you.