Vans Milton and Old Skool belong to the same brand but the Vans Milton is a heritage low-top style inspired by the classic version of Vans Old Skool.

Vans fans looking to pick between these two similar styles must be able to identify the differences between both that make one better than the other.

There seems not to be too much difference at a glance because both designs have the Vans iconic side stripe and Vans signature rubber micro-waffle outsole.

However, the major difference between Vans Milton and Vans Old Skool is that the Milton style has a premium suede and floral canvas upper, plus a U-throat lace-up pattern than the Old Skool.

But the Old Skool does it better in class, with luxury and a strong reputation for durability.

I remember when I was looking for a pair of Old Skool from my local outlet store a few months ago. The store didn’t have them, so I had to opt for the closet-looking shoes, which appeared to be Vans Milton low tops.

A few weeks later, I discovered that the Milton wasn’t ideal for the purpose I intended to buy the Old Skool originally – everyday skating.

This can happen to anybody because both shoes are almost identical. It takes a closer observation to identify the differences between them and see how they apply to the purpose that narrowed you down to these two styles.

So in the rest of this article, I have placed both styles side by side, pointing out their pros and cons and similarities and comparing them across all significant features and usage to land on a good final Verdict.

Why the need for this comparison?

What is that popular saying that you must compare prices to get the best deal in the market? Yes?

It is hard to tell the difference between both styles from a distance. Hence, it will be hard to discover which one will serve you well without making a closer comparison.

For example, the common response I got from most of my Vans geek friends on these two styles is that they are quite similar and the most apparent difference is the stitching over the jazz strip at both sides of the shoes.

But on a closer look, there is a huge difference in the seam arrangement of Vans Milton and Vans Old Skool. This is evident in both footwear’s front, back, and sides.

If you are a fan of Vans, it is easier to conclude that Old Skool wins the belt because Old Skool was the first one in history to have had this particular style. They also pioneered the integration of leather panels in skate shoes.

However, given that the Oldskool inspired the creation of Milton, the latter also shares Old Skool glory in the area of overall design and quality.

How do we know the one with more cushioning that provides more ankle support? How do we identify which style has thinner cushioning?

The looks of both styles may seem similar, but which has the end of the eye stitched under/over the suede toe box?

These are the kind of discoveries we can unveil when we make a detailed comparison between both styles to know which is best for us.

What are the pros and Cons of Vans Milton?

The Vans Milton has a classic low-top silhouette ultra-modern that makes it stand out.

It is a new design from the Old Skool that includes a padded ankle to improve the movement and security of the fit.

However, anyone who has the mind to choose the Milton Vans should be aware of the following pros and cons:

What are the Pros and Cons of Vans Old Skool? 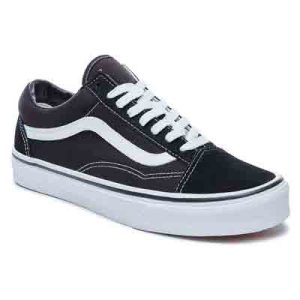 Old Skool has different types. However, if you have it in mind to go for this Vans style, you should keep in mind the following pros and cons of wearing/having Vans Old Skool:

It is easy to get confused about choosing between the Vans Old Skool and Vans Ward when shopping for Vans.

Even though Vans Old Skool has a story of success for a long time and Vans Milton is a revolutionized version, both seem or be a wardrobe essential.

They both feature Vans suede canvas and are practical for wearing every day.

I will attempt to identify the similarities between both brands. Knowing these will help us focus on where to base our comparison and where not to.

Vans Milton and Vans Old Skool share similarities which are:

Some of the differences between both styles are immediately apparent. However, more has to do with the construction. The latter is worth paying attention to because it determines their ideal usage.

Vans Milton makes use of premium suede and floral canvas upper. This improved its aesthetics but made it relatively hard to maintain. On the other hand, Vans Old Skool uses leather canvas and suede upper.

Old Skool is an older design that was the first skate shoe to use leather in its upper component.

The suede of Milton allows your foot to bend easily but makes it a little less wear-resistant than that of the Old Skool upper materials.

In other words, the upper of Old Skool focuses on skaters more, while that of Milton focuses on everyday wear.

Also, there is a difference in the seams arrangement between Old Skool and Milton on the upper design, especially in the front, back, and sides of both.

Milton is similar to production lineups like Vans Ward for the sole type. These styles have their vulcanized rubber soles glued to the upper.

Skaters argue that both shoes offer equal traction and grip as they feature the signature waffle outsole.

They both feature the waffle tread pattern, as seen in every Vans shoe.

But what sets the Milton and Old Skool apart in the distance in terms of sole style is that Vans Old Skool uses a light brown colored outsole, but the shade of Milton Vans sole is quite darker.

The impact of this difference shade of brown is still unclear.

Your feet are kept stable in both shoes because both the Milton and Old Skool are hyped for their durable tongue construction.

However, Vans Old Skool has a very minimal design on its tongue. Unlike Milton, where there is a black-colored Vans logo on top of a white label.

Vans Old Skool uses classic checker prints on their upper, irrespective of the design. On the other hand, Milton Vans impresses its buyers with an ultra-modern suede Look.

It is general knowledge that Vans invested so much in improving the cushioning of Old Skool. Milton is an innovation inspired by this drive.

However, Old Skool is well known for its thick cushioning that provides more ankle support than Milton, which is quite thin with less ankle support.

There is an apparent difference in the interior details of Milton and Old Skool, especially in color.

Milton has a bolder black interior like Ward, while Old Skool has an off-white interior. The latter is more difficult to maintain than the former.

There is always a good and bad side to every shoe, and Vans Old Skool or Vans Milton is not an exception.

While both styles have worn the hearts of skaters and everyday users alike, it is noteworthy that the distinctive preferences of individual persons will determine our interest in these two.

It is among the arguments of most skaters that Old Skool is better than Milton in the area of classic and luxury looking.

This does not dethrone Vans Milton from being a go-to affordable and low-profile casual sneakers.

While this final Verdict stands, it is hard to take eyes off the fact that there seem to be more fans of Old Skool than Milton’s.

It is expected since Oldskool is not a new kid in the block, and Milton is just a recent version inspired by Old Skool.

Vans Milton vs Old Skool: which should I buy?

All things being considered, I’d recommend you invest in a pair of Old Skool vans if you are a skater looking for luxury Vans footwear that is not only durable but classic and stylish enough for the activity.

This is not to push away the Milton lineup. (They aren’t as famous as the Old Skool, anyway)

It won’t be a bad idea to choose Vans Milton. However, it can only serve you well if all you need is an affordable, everyday casual shoe to wear for light sports or leisure activities.