Allen Edmonds vs Gucci Loafers: Which is better? 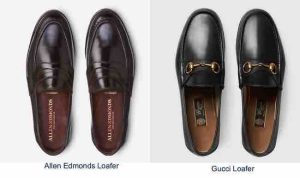 The fact is that no matter how good something or someone is, there will always be something better. That is why most people improve themselves.

Unlike other shoes that you will throw out when they are faulty or when they are worn out, Allen Edmonds brand will re-craft the shoe at a fee, making the shoe as good as new!

Why is Allen Edmonds better? 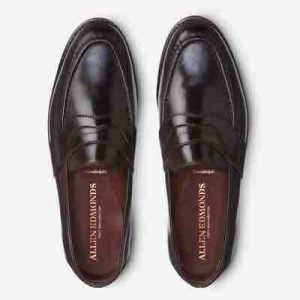 Apart from the aforementioned point of re-crafting, there are other reasons why Allen Edmonds (on Amazon) is better than Gucci loafers.

It comes in ranges of width

This is because Allen Edmond shoes are made of high-quality calfskin leather, which is the greatest material for dress shoes. It conforms to your feet, holds its shape better.

This is unlike other shoes that will change shape and structure after wearing them for a short period of time. It is also considerably soft.

Because of the soft material, the shoe is very comfortable and it will not hurt your toes as other shoes will. It does not really matter if your feet are wide or long, just get your perfect size and you are good to go!

It comes with leather lining

Allen Edmond shoes are produced with leather linen. If you have a severe case of excessive sweating of the feet, Allen Edmond is the right shoe for you.

The leather linen of the shoes gives your feet room to breathe, thereby preventing excess sweat.

Imagine wearing your shoes all day without sweating. Yes! Allen Edmonds has made that possible!

The Allen Edmonds brand actually gained popularity after supplying shoes to the US Army and Navy during World War II.

The fact that Allen Edmonds supplied shoes to the US Army and Navy during WWII speaks much about the brand’s quality and standards. Imagine a soldier going to war and on the battlefield, the sole of his boots is removed.

That would just be terribly disastrous! Allen Edmonds developed a large following as a result of this successful cooperation with soldiers. And since then, the standard has not dropped a bit. Consistently is truly key.

What are the similarities between Allen Edmonds and Gucci loafers?

As much as there are striking differences, there are also some similarities between these two brands of shoes.

They are both Goodyear welted

To start with, Goodyear welt is a method of shoe construction in which the insole, upper, and welt are sewed together and the welt is then stitched to the outsole so that the loafers uppers will be free of stitches.

Gucci loafers are regarded as among the best (in terms of both build quality and design).

They’re almost entirely made of some of the world’s finest leather, and the upper is stitched to the sole using either a blake or Goodyear welt, allowing it to be easily resoled by any good cobbler or sent to Gucci for repair (for a fraction of what the shoe originally cost).

The only way to ruin a pair of Gucci loafers is to tear (or otherwise irreparably damage) the leather upper, which is surprisingly tough given the material quality.

As for Allen Edmonds shoes, they use their 212-step production process, which has been the foundation for handcrafting Allen Edmonds Goodyear welted shoes since 1922.

Finding the best materials, which are hand-cut and hand-sewn, is the first step in the procedure. Following that, their seasoned team begins the long-term process.

Following that, an operator installs a 360° Goodyear welt and a sole. Finally, the shoes are polished by hand to enhance the natural appearance while also protecting the shoe.

The main essence of the shoes being Goodyear welted is that they will be easily re-crafted when they are old or worn out. As for Allen Edmonds, I have said earlier that they offer a recrafting service for a fee and it leaves your shoes as good as new.

Shoe cobblers can also do an amazing job for the re-crafting but it might not be as great as the company that made the shoes in the first place.

The uppers are both hand-sewn

A shoe normally consists of uppers, outsole, heel, and welt. The uppers are actually the most important part of the shoe. “Upper” as the name suggests is the section of a shoe that covers the toes, the top of the foot, the sides of the foot, and the rear of the heel.

The welt secures it to the outsole of a shoe.

One major similarity between Allen Edmonds and Gucci loafer is that their uppers are hand sewn.

As for Allen Edmonds, the uppers are currently cut and sewn in the Dominican Republic. The raw materials needed are transported in from the United States, where the uppers are sewed together before being shipped to the facility where the shoe is going to be finished.

Gucci loafer on the other hand made in the style of a moccasin and is hand-sewn.

Note that a moccasin is a shoe, made of deerskin or soft leather, consisting of a sole and sides made of one piece of leather, stitched together at the top, and sometimes with a vamp.

In summary, the hand-sewn style of Gucci loafer is unique to that of a moccasin.

What are the technical differences between the brands?

As much as there are similarities between Allen Edmonds and Gucci loafers, there are some differences in the making of both shoes.

Let me start with Allen Edmonds. Some of Allen Edmonds’s shoes are manufactured with rubber soles. This means that some of these shoes can be worn in any kind of weather.

Allen Edmond shoes with rubber soles are slip-resistant and provide improved traction on slick areas. They are also grease and water-resistant, which is a plus.

I also mentioned earlier that the Allen Edmonds brand provides for a re-crafting service. You can order for your shoe to be re-crafted with an entirely different outsole or even upper, as the case may be.

So, what I am trying to say is that even if your shoe is not originally rubber-soled, you can re-craft it to be, if you want to.

Gucci loafers do not come with rubber soles

The Gucci shoe if purchased can be sent back for a refix. This is to give the shoe a firmer grip.

They will begin by washing the original leather soles to remove any dirt, and then lightly sanding them to remove lumps that tend to form on worn leather soles and smooth out the leather’s surface.

Then they will apply glue to the pair of the rubber soles that they want to add to the shoes(the rubber will be a little thick).

Gucci loafer is a shoe with a specific aura about it. It’s easily identifiable, and everyone can see it and if they do, they will know that you have spent a certain amount on a pair of shoes.

What makes Gucci loafer unique is that it has a gold horsebit rather than a silver one. Older variants and the horsebit itself appear to be gold-plated. However, today’s version appears to be a cheaper version.

Allen Edmonds on the other hand does not really have a distinguishable feature that is so obvious so it might be mistaken for other similar brands by someone who is not versatile with the Allen Edmonds brand.

Why you should buy Allen Edmonds

Asides from the fact that Allen Edmonds has produced shoes of outstanding quality over the years, another reason is the versatility of the brand.

Variety, they say, is the spice of life. No one who stays comfortably in his comfort zone will progress. I am pretty sure this was the driving factor that made the Allen Edmonds appeal to the younger generations.

There is no doubt that there are different industries and companies that pursue different senses of styles but Allen Edmonds wants to be the one that cuts across.

They produce shoes for older people and also ones that appear to the urban chic generation. For example, about ten years ago, Allen Edmonds was not into boots manufacturing but now they produce and sell boots. They did not stop there though.

They also manufacture sports-inspired products and these new products come in various varieties and styles which makes it better for people who are picky when it comes to designs.

This big leap taken by this brand a couple of years ago has made them relevant.

Why you should buy Gucci loafers

The Gucci brand is one of the most popular and luxurious brands in the world. Not only are they popular and iconic, they are also hugely respected in the fashion industry.

They have stood the test of time. That’s the beauty of simple footwear. In American culture, a loafer or slipper evolved from a low, lace-less, slip-on shoe that many people found uninteresting.

Over the years, Gucci also found a way to elevate what was originally intended to be a casual look.

I would say that Gucci loafers are also a brand that is versatile. It is versatile in the sense that it can be worn on both casual and noncasual wear.

Because the manufacturers have evolved over the years, the Gucci loafer is now a shoe that can be paired with casual wear and also is paired with formal wear.

What I am trying to say in essence is that it was the first shoe to bridge the gap between casual and formal wear.

Also, Gucci loafers come with different designs so if you are thinking of purchasing, you have a wide variety to choose from.

The design options that come with choosing up a pair of Gucci Loafers are unlimited since they are made of various materials such as suede, velvet, patent leather, and the most generally worn soft leather.