Legendary Air Force 1 is an athletic shoe manufactured by Nike; a multinational company. 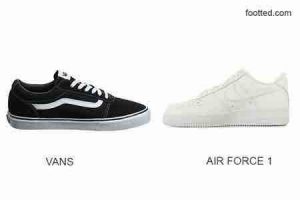 It was first worn by basketball players. Sticking to its root, Nike’s Air Force 1 first launched the Nike Air technology far back in the 1980s.

I’ll explain better as I go on. Air Force 1s are sold in 5 styles – low, mid, super low, high, super high.  Those who appreciate height will choose the high tops.

The high-top version was the first version to be released before the mids and the low version.

While the middle strap is insulated in the shoe, the high-tops straps are removable and movable. The high-top straps come with Velcro straps.

There are over two thousand versions of the Air Force ones. Low Air Force 1 comes in white color and is a must-have for fashionistas these days although the high tops come in different colors.

The high tops have the all-white (white on white ) and an all-black ( black on black ) color mostly in distribution but other colors exist and are being produced.

But for this article, I’ll be extensively dealing with Air Force 1.

Vans is known for its unique quality in skateboarding by skateboarders including BMX riders.

Vans were originally meant for sports activities but we’ve evolved to wearing them for other purposes.

Vans shoes also come in different styles, colors, and sizes. A little distinct from each other in a way. They equally have their technology that keeps Vans sales right on point.

This article will distinguish between both shoes and indicate the similar features they have. Without any more delays let’s get to it.

Similarities between Vans and Air Force 1

They are athletic shoes adopted as sneakers

Both shoes are used in sports fields. They enhance performance during sports and are thus made in that way.

In recent years, they have been imbibed into the fashion industry band which makes them appropriate for use as sneakers.

The Air Force 1 transitioning from the basketball court to a street icon is one thing to be wowed by. Same for the Vans, skateboarding to leisure? Very interesting.

This makes them fabulous and wanted by all. A must-have in the neighborhood home and abroad. This particularly is a striking similarity they share.

They are not sex-specific

Not all shoes sold are indeed worn by men and women. This is not the case for Vans or Air Force 1.

Vans are worn by men and women in various shoe sizes helping many accomplish their couple goals by wearing the same shoes on vacations and outdoor celebrations, carnivals, etc.

This is the same for Air Force 1 as there are no restrictions placed on sex or gender. Any gender can acquire an Air Force 1.

What an interesting feature they’ve got. Yet another resemblance.

They are highly durable

Durability is very important when planning to buy any shoe.

shoes need to last long. This is one reason for acquiring a shoe. As no one would gladly get a shoe that goes apart after very short usage.

That is why you should buy an Air Force 1 or Vans. They won’t give you public embarrassment or disappoint you, they stay much longer compared to other shoe brands.

They are made to withstand any form of force they may encounter. That is why some are hardy.  Replacing shoes all the time will be something of the past.

You don’t have to worry anymore since you get this and many more in both shoes. Isn’t this amazing?

Want a show you can wear to every and any occasion or event? Get either an Air Force 1 or Vans. Air Force ones go with everything.

They look superb in jeans and other dresses, they can be dressed up, down and still give comfort alongside confidence.

They are casual, comfy,  stylish, and classy. The Vans ain’t no different. Vans shoes can be worn to both corporate and casual events as the case may be.

They are out of the estranged box. Feel free to rock them as you please. For that lunch date or visit to a fast food outlet, you could try these shoes.

They are fantastic in this sense. Looking alike.

Owning a Van or Nike Air Force one is certainly not a hard one.

It feels great to know you can buy a quality show and not exhaust all you have left on the budget.

This is what you have in cases of Vans and Air Force ones. Although the Vans are cheaper, you can still get the Nike Air Force 1 07 with 20 to 30 dollars extra this is a little higher in cost than the Vans.

Vans shoes go from 30 to 60 dollars and it’s quite affordable not much of a disparity. An average man can equally acquire either of the shoes. They fall into this classification.

Differences between Vans and Air Force 1

The outsole of Vans shoes in its design is entirely different from the Air Force ones.

People regard the outsole as the most important feature because of the gripping, balance, and performance ability it gives.

Vans have a waffle sole technology. A known signature. Here, the sole has a grip pattern that adds to the slip-on resistance while skating.

The waffle sole looks like a criss-cross pattern in appearance and glued together.

Air Force 1 on the other hand, has a characteristic concentric circle outsole. It is the part continually in contact with the ground.

It features the cup sole technology which is amazing for basketball players back in the days even in this time.

Sole technology in an overall view

It is important to note that Vans are built with a vulcanized sole technology. This simply means passing natural rubber under heat.

The essence is for stability when in use and tight hold onto the skateboard. Lightweight materials are not used to prevent melting.

One can also find air pads in the outsole. Just for extra cushioning, I think.

The Air Force 1s are made up of rubber cup soles with some stitches on the outside.

One interesting thing is there is a heel with a cross arch structure that gives a little bit of extra cushioning.

This feature may not be seen in other versions of Nike shoes for example the Air Jordan 1s do not have this feature.

Just above the inside of the shoe and the midsole is the structured insole. It can also be called a sockliner. That is where the sole of your foot is touched directly.

The reason for the insole is to give a good feel to the sneaker. The outsole technology and design are not enough.

Interestingly some insoles are removable while others are glued down. This makes replacement simple and less of a headache especially for people who like a high arch to get insole with high arch support.

Vans insoles have a closed-cell foam construction. They are designed in that way for a good feel. The insole is lightweight hence very flexible.

Some insoles have an anti-bacteria effect though it is not peculiar to all shoes. The insole of Air Force one is usually made of rubber, foam, or leather as the case may be.

Insoles generally change the feel and fit of the sneaker. The liner is a  fabric liner with some foam in it.

Exactly between the upper and outsole is the midsole. Like I stated in the table above,

For the Air Force ones, it is the part that carries the air unit of the shoe – the cushioning technology.

The outer wall of the midsole is made up of typical rubber that houses an enclosed air sole inside.

This brings me to the Nike air technology. This technology employs the use of pressurized air trapped in the sole, the sole can be described as a tough yet very flexible bag which results in its increase.

The aim is to provide improved cushioning and balance to the wearer. The air sole unit can maintain its form with an elasticity-viscoelastic unit.

By viscoelastic, I mean combining viscous material, probably molasses, with elasticity to return to the initial form which is rubber.

The gaseous medium inflates the sole thereby pushing the wearer up. That’s like a pump-up. The foam surrounds the air unit.

Another great thing to know is that the air unit goes three-quarters the length of the shoe. This probably gives a little more cushioning and a bit more height.

That explains why the shoe is comfy and big because there’s so much on the inside.

The Nike Air Force has its midsole glued in rather than being exposed. This gives the shoe an elegant appearance.

On the other hand, Vans shoe additional midsoles are made with closed-cell technology like the insoles. Mainly for an extra cushion.

This time looking at the shoes won’t give you a clue on how much they’ll be sold.

Nike Air Force 1 usually costs slightly more than Vans shoes coupled with the comeback they made and how much they improved on the technology hence the price.

There are other styles and versions of Air Force 1 that are sold less. That’s why variants were made available.

For someone with a large budget, an Air force 1 should cost about $90 and that’s affordable if you ask me.

For a seemingly average person, Vans shoes ain’t that expensive. They can be gotten for approximately 30 to $60 depending on the style and version you like.

Vans shoes here might have an advantage as more people would go for a relatively cheaper shoe.

The fabric used to make the shoe says a lot about it. It is visible to everyone and it makes it easy for anyone to spot. Vans are mostly made of leather and suede.

You can feel the suede with a single touch. This gives the shoe that toughness and durable nature like I stated in the table.

Leather also is quite resistant to water with high performance in winter building warmth in the cold.

Air Force ones are made of leather. This is a great improvement in the fabric choice of Nike. The original prototype was made of mesh, not full leather.

You see the upgrade. It has been tested to have the grain pattern or a mixture of both grain and split pattern (part of the cross-section of the hide, upper grain, or lower split section) but the toe panel and back panel have an impressive grain pattern.

I have done a comprehensive explanation concerning Vans and Nike Air Force 1.

Highlighting the similarities, and differences between them. Each sums up to be a great choice.

Remember the shoes are versatile as hell, rocking them to any and everywhere with an eye-catching appearance.

You make the choice.