It is a highly responsive bounce-back technology that Newton shoes have. Take a Newton running shoe and turn it over and see the line of lugs, run your palm over it and you’d notice how the lugs are higher than the rest of the parts of the sole.

It is also called the P.O.P or Point of Power. It is Action/Reaction technology and a lug system inherent in all Newton running shoes.

Altra shoes on the other hand have regular soles with traction for a great running experience.

The company that makes these shoes started out in 2009. The founders, Brian Beckstead and Golden Harper met in high school and became friends.

Harper began by cutting up and designing running shoes from other brands until he came up with a better performance shoe.

This type of performance was later called a zero drop, a tag that refers to shoes with the same height in the toe and heel area.

Brian and Golden along with partners Quirl Hansen and Jeremy Howlett showed their designs to footwear companies but none of them wanted to produce this design.

The partners designed to start their own thing in 2009 in partnership with Pulse Labs, an engineering firm in Brigham Young University, and also with manufacturers in Asia. Harper came up with the name Altra.

It was a word with origins in the Latin word altera, which means “to fix or mend something that was broken.”

In 2017 the company partnered again with Utah State University to create an Altra running lab.

Here students will be able to develop and design shoes and other sports-related materials. VF Corporation acquired Altra in 2018.

The company that makes Newton running shoes is owned by Jerry Lee and was created in 2007 with headquarters in Boulder, Colorado.

The name Newton came from the scientist Isaac Newton’s third law which says for every action there’s an equal and opposite reaction.

The shoes are designed following how humans run and land their feet barefoot. Studies show that if a person is running they usually land on their midfoot and not their heel.

The aim of the company is to become a world-class leader in natural running shoes, making shoes that mimic the way the human feet act when a person runs.

One thing to note about Newton Running is their shoes are meant for those who’ve been wearing barefoot running shoes before. Or those who are already used to midfoot and forefoot striking when they run.

This way it is easier to transit to Newton Running shoes and enjoy it. Newton shoes are designed using scientific methods to match the human feet in action to shoes.

Each of these types has its advantages. Altra and Newton Running shoes are both low-drop shoes. That being the case it may be difficult to tell the difference.

This comparison will accomplish the following:

Find out which is a better low drop

All low-drop shoes can’t be the same, unfortunately. You’d have to make a choice among the plenty of options that will be presented to you.

And it may be a hard choice sometimes. But with this comparison this should be easier for you.

Which is more durable

With this comparison, you will get to learn the materials used in the manufacture of each shoe. This way you can tell which one is more durable.

Price is not everything. But it is as important as the other criteria for purchasing a shoe. Some shoes are cheap yet they pack utility.

Sometimes, however, you get what you paid for. So let’s talk about everything that differentiates the two shoes and what makes them similar.

What’s the difference between Altra and Newton Running Shoes?

Let’s launch into an in-depth comparison of the two shoes by beginning with the differences. They are:

It is appropriate to begin this comparison from the soles of the shoes. This is where you’d notice the most difference.

Soles are very important in running shoes, they can make a world of difference. In Newton Running, you’d notice a special design featuring lugs placed just under the forefoot which elevates the shoe in that area.

What the lugs do is create an action/reaction effect when you run. The lug propels your feet, giving it more launch when you take off, and when you land it absorbs most of the shock.

It is a technology patented by Newton Running and found only in their running shoes.

Altra shoes on the other hand feature the normal soles you will find in other running shoes.

In the two images below you’ll see these lugs featured in Newton Women’s Running Distance S 11.

Did you spot the lugs in the sole of the shoes above? Notice how prominent the lugs are, with the grooves running through to provide traction when you run.

The sole is unmistakably different in the Altra. It is flat, just like a zero drop should be. There are no lugs to be seen.

One of these running shoes features a design that mimics the shape of the human feet and it is Altra.

That’s one difference between Altra and Newton Running. The trademark of Altra shoes is to make them as close to the shape of human feet as possible.

When you slip your feet into an Altra, it feels exactly like your feet are bare. This is why Altra shoes are extra comfortable for running.

When your feet flex, it does so without making you feel any aches at the end of each run.

Check out the Altra Escalante below again.

Note the shape of the sole and the upper of the running shoes. See the outline of a foot in the sole. Most Altra shoes feature this design.

It is not so much a thing with Newton Running shoes.

For example, note the difference in the shape of the Newton Running Fusion below. 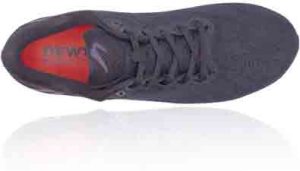 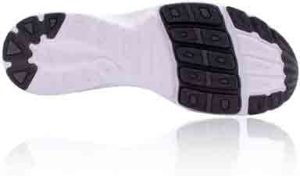 Note the lugs here, but also note how it’s shaped like every other running shoe you’ll find on the shelves.

Although you can say the Newton Running features wide toe boxes, this isn’t the same as the shape of a foot.

A closer look at this Newton Fusion even suggests that runners with wide feet may have a hard time running in them.

By now you have noticed this too. One of these shoes features a total zero drop and it is Altra shoes.

One look at an Altra shoe and the zero drop profile hits you. Newton Running features a zero drop too but you have to admit there are still some heels in their shoes.

Below is a comparison of the two shoes showing their zero drop profiles.

The first one is a Newton Running Gravity 11.

Note that there’s still sufficient heel material. Also, note that the low drop profile receives a buffer from the lug that is propping the shoe up in the midfoot area.

This isn’t a problem with the design, I assure you. It is only to show the difference between the two shoes.

And below is the Altra Escalante Racer.

Note that Altra maintains a more consistent low profile from the heel area and across the midfoot to the toe area. Altra features a 0mm, no platform appearance.

There’s an equal distance to the ground from the forefoot to the heel. Hence in and outside the shoe, Altra is a true low drop shoe than Newton Running.

What are the similarities between Altra and Newton Running?

Now let’s examine some similarities between the two shoes. They are as follows:

We have to admit Newton Running into the class of low drop shoes because in truth that’s what they are.

Altra shoes are more pronounced low drop shoes as you have seen. This is a similarity you will find in both Newton Running shoes and Altra.

You are left with making a choice between a chronic low drop shoe in Altra or a moderate iteration in Newton Running.

It’s a good thing that we even have this opportunity to make a choice in this matter. The benefit is you can buy both shoes and wear them as the body – or the feet – leads.

Low drop shoes always feature exceptional cushioning. Think of all the injuries and aches the muscles and bones of your feet will experience if you run barefooted and you’ll understand why cushioning is so important.

With low drops, you don’t have many fillings in the heel area. Newton Running features responsive cushioning in the shoe to absorb and minimize impact and fuel efficiency.

Altra features a lightweight and flexible response in the shoe to resolve the problem of impact on your feet.

Almost anyone can afford both Altra and Newton Running shoes. It’s interesting that the two shoe manufacturers make shoes with such fine technology and still make them as affordable as possible.

The prices of both shoes range between $110 and $150 which in my opinion is moderate for running shoes.

Altra shoe company has gone synthetic for a while now, trying to support our environment and also protect the animals.

Newton Running makes their shoes using synthetic materials too and here is where we find a similarity in the process of making shoes.

Newton Running has an obvious enhanced propulsion mechanism in the lugs under the sole. Instead of lugs, Altra achieves its own propulsion with the aid of the Altra Zero Drop™ Platform technology.

It not only solves impact issues but also helps you launch naturally when you run.

So now that you’ve seen all the comparisons, which is a better running shoe of the two?

Personally, it is a difficult choice I’m being called upon to make. Both Altra and Newton Running are great shoes with really impeccable features to boot.

I won’t tell you one shoe is bad for you because low-drop shoes are the thing. I recommend low-drop shoes for all runners. When it comes to a real low drop shoe though, I’ve got to hand it to Altra.

My favorite is the Altra Torin which I’ve been running with for years now. I’ve tried Newton too, great colors, and the lugs are super effective.

But Altra takes the cup.

What should you take from this comparison overall? Well, if you are looking for a low-drop shoe to run with and enjoy it thoroughly, you have the two best ones here: the Altra and Newton Running.

If you are one who loves to experience a scientific running experience I suggest you pick up Newton Running today.

But if you are a traditional runner like me who loves the good old feel of road running, then stick with the range of Altra running shoes.

And about prices. Well, running shoes are expensive shoes. That’s not a problem personally because anything to stay fit and healthy.