My friend came over some time ago and as usual, we played our favorite Overwatch game.

We have been playing for some time, and out of the blues, he said to me, Have you noticed, why does Tracer wear Crocs in overwatch?

This is something I had never for once been so conscious about, maybe because that does not look odd on her. Like I didn’t observe that on her! How?

The truth is that Tracer wears Crocs and most of us don’t know she wears it.

A lot of us thought that was the way her animated physicals were developed. But no, it is the futuristic Crocs on her. 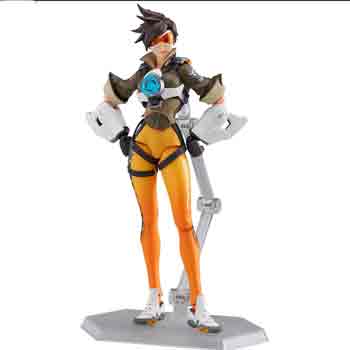 This was never mentioned, I am sure you are in a denial about this, but you can as well look at her and accept this, I can’t believe my eyes.

I threw the question to some of my friends, ‘why does Tracer wear Crocs?’. Few people said she must have worn it for memes and maybe other reasons like wearing it for a dumb party joke, in other to make the comics hilarious.

So, why Tracer does wears Crocs?

I can’t unsee, but you have to know she has a reason she wears Crocs. Come to think of it, Crocs are lighter when compared to others, and can be lifted without ease while running or in an emergency.

Tracer nature is almost about a swift race and teleporting, it may not be comfortable enough if she is on a huge converse. Crocs fit her personality as a swift character in the Overwatch game.

Although she wears boots in her cadet and lunar years skin, she also wore sneakers in her Graffiti, Track, and Field skin, yet when you see most of Tracer picture on a magazine, you always see her with Crocs most times.

The fact that wearing boots and other foot wears kept you from remembering what shoes she wears most time, yet when you are conscious enough, you get to know that she is mostly on Crocs whenever she is in Overwatch or any other featured media like the magazine or comics.

But it doesn’t mean these shoes are made with heavy material, every footwear she wore was to give easy movement. Apart from movement, the Crocs were on her to make it unique. It is her identity and it fits her perfectly.

The Crocs also suit her better to play her roles. Tracer is one of the relevant role-players in the game and other comics in which she is being featured, so her identity is very important to make her unique even though the major reason she wears Crocs is to keep her fit while operating her skills.

Why I love the Tracer Character, and why you should

The first time I heard of the Tracer was in 2015, then it was in my college days, that was when I was taught how to play a video game known as Overwatch by a friend of mine, Mike was my best friend in high school then.

Maybe you are familiar with Tracer, then you should want to know more about the legendary in combat.

Lena Oxton is popularly referred to as Tracer as a result of her fictional playable character in a video game known as Overwatch- an online multiplayer battle pitch game.

Tracer was first introduced in the game in 2014 until when she was updated as a playable character during the 2016 update in April by Blizzard entertainment, the team that developed Overwatch.

In the character, she is of British origin, which has been noted by the majority as an energetic and peppy quality.

Judging by the character she plays in the game, Tracer is someone with a low and incomplete state of wellbeing, yet something very unique about her is having a highly mobile skill- teleportation, which includes the ability to time-travel.

That skill alone is one of those facilitating identities I look out for. Her speed and that of teleporting are rare. She does it differently whenever I attempt to compare her to others.

For me, she has been my best character in the game from day one, till now. She was one of those reasons I would get myself addicted to Overwatch for more than 9 hours daily just to make sure I have fun in victory.

She was been featured in several series. In December 2016, she was featured again in a digital comic series called reflection.

Here, she is playing an entire role, she was in a romantic relationship with a woman whose name was Emily, where she played a role of a lesbian with someone who is not on the Overwatch team.

In 2017, around April she made a physical appearance in the second series of the animated Overwatch shorts, titled Alive.

In this series was the scene she tried to stop Widowmaker from assassinating Tekhartha Mondatta – who was also a part of the role in the series.

Tracer has been tagged as the poster girl for 3D video game comics like Overwatch. She has attracted so much media coverage which is related to net controversies surrounding some of her game victories poses, including her fame in fan-produced pornographic comics, although Blizzard has tried to remove that identity from her. 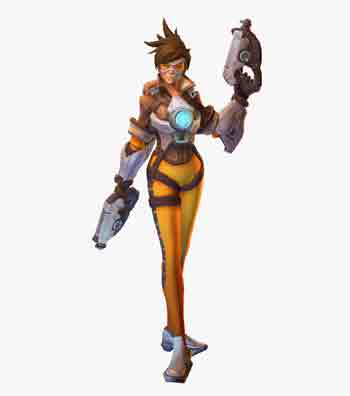 Crocs feel nice on her, and I never loved wearing Crocs until I saw it on Tracer’s feet. As a matter of fact, I never considered buying Crocs until Mike made me notice this interesting situation.

To some people, they feel it is not worth it for her, but I guess I should share with you the reasons I love her wearing Crocs.

I love the way she would express herself without having to wear something very hug and heavy, her kicks are one of those perfect moves I admire.

Imagine trying the Crocs Crocband Full Force Clog, to see how similar you can act like Tracer.

Maybe not that similar as a result of the absence of similar skills she has, the How does Tracer wearing crocs makes you feel, yet the Crocs Crocband Full Force Clog has the same look with what Crocs the legendary battle girl, Tracer is putting on.

When I first saw Tracer with Crocs in 2016, I never knew I was unconsciously falling in love with her feet, the way she runs and also give her badass kick made me pick on her feet, not knowing the Crocs on her was the major reason while I picked on her feet.

I researched Crocs then and made my way to get Crocs Women Literide Mule, although this Crocs is meant for women, I love it so much on me. It is very durable and most interesting rated by past verified buyers who got value in it after purchase.

It is very affordable, not a heavy materialized footwear, and above the structure is crazy enough to get a thumb up from you.

No one knows it’s a women’s Crocs cause it looks like unisex footwear.

While I was still using Crocs Women Literide Mule, I realized Tracer is making me fall in love with Crocs. I admitted that fact, so I needed to get more Crocs to possibly make moves like Tracer, dumb me!

I bought Crocs Unisex-adult on-the-clock clog because this is one of those top and amazing Crocs that looks exactly like the Tracer crocs.

I was so dumb to the extent of practicing Tracer moves with it; I believe there is a connection using what she has.

But, honestly, it is worth it. At least I could not get close to her performance, yet I enjoyed my Crocs because it allows you to move swiftly and it is also very fashionable.

The Crocs Unisex-adult on-the-clock clog is a very thick premium leather-made Crocs with almost zero weight It is very light to an extent that it helps me move fast.

Will you try out Tracer’s Crocs by buying yours?