Are you curious about the reasons why skaters wear dickies for skating?

Of course, there are other products in the market. But one may be forced to ask, why is it more than apparent that skaters are very much obsessed with dickies?

Probably there are some benefits they enjoy that have consistently kept them glued to the brand over the years. This article is sure to satisfy all of these curiosities.

Here are 10 reasons why skaters wear dickies for skating 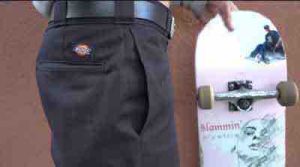 Dickies is a popular worker brand. They are an American brand that had their set up dated back to 1922.

One of the major things that grew their fame then was the sturdy workwear that lasted pretty long compared to other brands, hence, they stood out.

Dickies have always been renowned for toughness and high quality. The dickie brand has had its good reputation as far back as during the second world war.

Then, they majorly deal in the production of heavy-duty products. The US government had acknowledged their top-notch quality, so much so that the brand was contracted for the production of the US military khaki.

But, this is a different era. Why are skaters still obsessed with the dickies?

They are super comfortable

During skating, there are lots of twists and bends, and other body movements too. No skater wants to wear something that boxes them up like some astronaut heading for space.

Certainly not. Any type of design that should serve for workwear or skating just has to be flexible enough and moderately roomy so you do not end up being in some type of static position.

It is no news that the level of comfort embedded in dickies made the early skaters to adopt it.

This had led to its widespread fame and common use among the new generation skaters.

Skaters almost always go in unnatural positions that range from grinding, kickflipping, or sliding down a quarterpipe on the ass. They do this constantly.

I am a big fan of dickies as well. I have used a couple of them, so I can tell to a great extent why any other skater like myself should be glued to it.

There is this extent of freedom and comfort I get. It boils down to the material with which it was made and the pattern in which they are designed, especially because of the plenty of room.

If you’re considering skating, dickies are just perfect. But there we all have individual preferences.

They have great looks

You will agree with me that apart from the quality, durability, and comfort of all products in general, one core thing that promotes the market is appearance.

You might be thinking no one is paying close attention as you do your thing with your skate over the streets in your city or parks. Well, you have to reason that again.

You are definitely drawing attention. Skaters know this. That’s why they make sure to take pride in appearance, and there is no product that will perfectly come in handy in both design pattern and outlook. Hence, the use of dickies.

Dickies gives this confident and dominating look. It set skaters ON for the park and streets and put them on top of their game.

Gone are the days when skaters just skate for the sake of it. Now, the trend is fashion and skating skills. As such, having good skating looks very important too.

And dickies have already gotten that market mental dominance and recognition that has subconsciously wired the mind of the populace to hold it with high esteem and value, hence they always appear great before everyone.

Most skaters know this and it is for this reason they have been glued to dickies.

Any designer that is designing clothes for people that work in mines, forests, factories, or workshops should have in mind that durability is of paramount essence.

Hence, the reason for the toughness of dickies,  because that was the starting point of the dickies brand. If is for this reason that they had durability in the DNA of their brand.

Even after the passing of time, the influence of the early times still affects the current production.

And the fact that dickies are tough and durable is one major reason why skaters like them as it suffices perfectly for the tough skating times.

During the 80s down to the late 90s, when skaters get hold of dickies, they already have it in mind that they are definitely going to withstand mines, timber, asphalt, and whatnot.

New generation skaters too love dickies for their ability to withstand the pressure they subject it to during use, and without easy wearing and tearing out.

It is inarguable that most skaters are just naturally glued to dickie because dickie is tied to the skate culture. Nobody ever forced dickies on skaters.

Skaters chose them. And now, dickie has become part of the uniform to an extent that dickie now take advice from skater so they would know how best to produce for them as it relates to all that pertains to skating.

Both on styling decision and on its technical aspects. So, apparently, skaters tell dickie what and how to produce, dickie makes production on skaters’ choices, and skaters love what they get. This is how the bond is formed.

However, there is a greater factor that spurs this bond and connection between both parties.

Dickies has gone as far as sponsoring skate teams to different events in many parts of the world. This has led skaters and dickies to grow some sort of family bond. What do families do? They always look out for each other.

And this fact that skaters have been going to different parts of the world wearing the dickie brand is a kind of advertisement that subconsciously plants the use of dickies in the minds of other skaters too.

In this way, the use of dickies by skaters keeps growing and stays that way.

Dickies have passed the wear test

Dickies has really made a great deal of catching up with some of its Italian flow team riders doing one of the coolest things they know how to do best; skateboarding.

It was basically for a wear test and for the demonstration of the quality and the functionality of some of the dickies coolest iconic products.

They even had to deliver a location at the Pinbow indoor skate park that is situated in Italy, Milan precisely.

And they found the coolest scenario that they used to test some other the dickies iconic skating products.

Some of the most recognized are the 847 original, slim straight, industrial pants, double knee, and other great styles.

In the end, one thing that was realized was the fact that durability, comfort, and style were the core three reasons why skaters and other riders chose dickies over other existing products in the market.

All they wanted was a product that was durable. Something that could allow them to practice their skating skills without restriction to movement while still carrying style along, be it on the park, on the city streets, and other varying terrains.

So, the fact that dickies passed the wear test gave them an edge and more ground of dominance.

This way, there is a symbiotic relationship between dickies and skaters as it is a win-win situation on both ends. 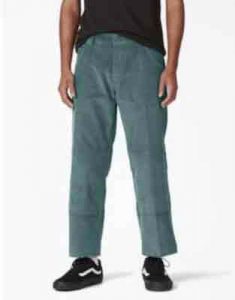 One of the first workwear brands that became popular for being fashionable, and one that was found cool by skaters was dickies. It is no news that, over the years, skate culture has been greatly influenced by dickies.

Normally, skateboarders usually wear whatever they feel like wearing, but there came a time where you mostly see them in oversized shirts and big baggy dickie trousers.

This is because one easily skates better when they are in wear that puts them on zero restrictions.

You also see them wearing sick accessories like beanies, stuffy trainers, and wallet chains. But nowadays, everyone is following the dickie trend.

Every public figure and popular celebrity like Bella Hadid, Kanye West, and A$ap Rocky too have been seen rocking the brand.

The dickie brand is just more than timelessness. It never goes out of fashion. The brand always does well to make sure it keeps up with the growing updates to always stay in fashion and on-trend.

And for the fact that skaters love being on top of their game and never to be caught looking old-fashioned and outdated, they stick to Dickie.

Dickies has a skateboarding collection

There is no brand that beats Dickies on being popular with skateboards.

And for the fact that Dickies have finally released the long-awaited skateboarding collection just doubles the love of skaters for the brand as skaters have now been overwhelmed with the luxury of choices to pick from their favorite brand.

Hence, the bond between skaters and Dickies is on constant smooth sailing.

One thing most skaters find really cool with Dickie is the fact that Dickies are first off, not even an actual fashion brand, their clothes were actually made for heavy-duty workers that are constantly on heavy-duty labor.

But in spite of this, the workwear has been rocked as though it is a stylish outfit and looks really great. A real pretty badass.

It is no news that Dickies have been intentional in staying true to their customers.

And this has placed them on higher strata on the landscape of genuineness in the eyes of skaters and the general populace.

Recommendations from other skateboarders 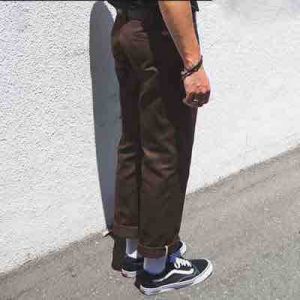 Some skaters have confessed that they have always been bereft of the knowledge of all that pertains to Dickies until they got recommendations from other skaters about the brand.

In their testaments, some were able to reveal that they initially felt reluctant about trying it out. But when they did, the user experience they had was the best thing before awesomeness.

It did not stop there as they also recommended dickies to other skaters who felt great about it and had the recommendation chain growing.

It takes a quality product to not do much on advertisement as the product will advertise itself. Indeed, Dickie has earned themselves value.

There’s this cognitive bias in psychology called the bandwagon effect. It translates to the tendencies where some people adopt certain behaviors, attitudes, or styles, just because of the reason that others are doing so, and not necessarily because personally decided to.

To be more precise, you can call it the cognitive bias of public opinion.

It is true that Dickies has already made a good name for itself that has had many skaters using it. Other skaters just jump onto the train simply because it has been accepted by the public. 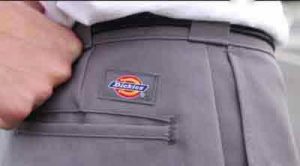 The bond between Dickies and skaters keeps getting thicker by the day as the reason for this bond has been strategically made to be on a constant growth chain.

Another angle to look at is because Dickie has got no strong competitors that rival them on who rocks the world of skateboarding better. Hence, Dickies sit comfortably on the top of it.

Of them all, the three main reasons why Dickies have gotten this good with skaters are for its durability, public acceptance, and the fact that Dickies now has a skateboarding collection. Indeed, Dickies has come to stay.