Yes! Celebrities wear Crocs. A lot of them do, and most times you see them wearing it casually or they could get endorsed by a Crocs brand for them to promote it.

A lot of celebrities like Post Malone, Justin Beiber, and the likes have all worn Crocs. Even the likes Of Nicki Minaj have also done the same. Crocs look really good for a casual outing, some celebrities wear it for shopping and it still looks really good.

Celebrities who have rocked Crocs 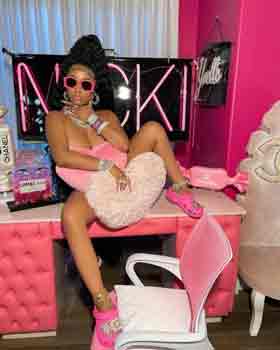 Nicki Minaj is another stunning rapper who loves to rock her Crocs. She was spotted wearing a pink Crocs that has a lot of pink designs on it. Nicki Minaj loves pink obviously.

She took the picture to her social media and fans fell in love with it. After she posted the photo, her fans were all over her page looking for where they can order theirs.

Post Malone who is the Sunflower crooner in 2019 is one celebrity that has not been left out when it comes to rocking his Crocs in a stylish way.

From the image, you can see that the Crocs comes with a black-and-Navy color scheme which a lot of fans do not really like.

Because of how he rocks the Crocs, a lot of fans still love it and want to get one for themselves. Post Malone wore this when he collaborated with Crocs for a promotion Photoshoot.

You can see that in this photo above.

In this photo, you can see Luke Combs is in camouflage color. One good thing that this Crocs comes with us that when you wear it, the camouflage color makes it look like you’re not even wearing Crocs.

This is a huge advantage for those who want to buy the Crocs as they have seen how good it looks when Luke Combs rocks it. Luke Combs took a picture with this Crocs while he was chilling and playing his guitar.

It matches so well with his surrounding as well. This is pleasing to the eye.

Drew Barrymore is another beautiful actress who rocks her Crocs really well. Her fans are really questioning why the word ‘Love’ was inscribed all over the body of the Crocs. Still, it does not look bad at all.

Drew Barrymore feels that it is great if your Crocs designs are made with so much love. You can see her wearing Crocs as she relaxes to take a good photoshoot.

The Crocs looks really good on her &and this can really influence her followers to go get one for themselves.

Her fans love how she was able to match the colors which make it very attractive as well. This a very good combo. You can see her chilling outdoor and taking a very good photo with her Crocs.

Justin Bieber cannot be left out when it comes to rocking Crocs. He styled Crocs differently in a very fashionable way. He styled it with an all-yellow outfit.

You can see that he wore a nose mask in this photo which he is indirectly telling his fans not to forget using their nose masks to curb the spread of Coronavirus.

Justin Beiber wore Crocs for an outing as you can see him stepping out of his fancy car. Fans love the way Justin matched his Yellow Crocs with an all-yellow outfit.

Bad Bunny who is a Puerto Rican reggaeton star is also a celebrity who rocks his cross stylishly. You can see how committed he is to wear the Crocs for this photoshoot.

The fluffy hair and also signature shades make the photo colorful. This is what fans love and that is more reason why they’re going to keep getting the Crocs and buying more.

Bad Bunny rocks it so well and it also looks so good on him.

Jennifer Garner the Hollywood star is also someone who rocked her Crocs while she was going on an errand with her daughter.

This is what a lot of her fans are talking about, they were wondering why would she wear Crocs and take her daughter on an errand with her daughter Violet in Los Angeles.

Fans still love Jennifer and they will always be there to show their support. Her fans and all those she is influenced by will still love to get those Crocs of hers.

Whoopi Goldberg is someone that has a very good sense of humor when it comes to dressing. She knows how to combine different types of clothing and then create something great with it.

In this photo, you can see her wearing orange Crocs which match the color of her bag. She wore this outfit to the 2013 Tribeca film festival.

This is really a unique and creative way to rock your Crocs. She really did a good job of combining the colors of her Crocs.

Jack is one of the biggest Hollywood stars out there and in this photo, you can see Jack rocking his blue Crocs with a simple casual outfit. There is nothing official in his outfit. Jack combined a bright blue Crocs with a yellow top and a short.

This may not be the best way to rock your Crocs, but Jack did it in his own casual style and his fans see nothing wrong with it. He wore the Crocs casually to an outing and you can see him taking a pose while he takes a nice picture. He did not wear the Crocs to any official outing.

Leighton is usually seen as a fashionista. She rocked her yellow Crocs with a casual outfit as she stepped out with Selena Gomez.

You could hardly realize that  Leighton is the one wearing those yellow Crocs if you do not look closely to recognize her. She rocked it well and if you look behind you will see her fans who support her.

They are also influenced by her and they would love to get the Crocs she is wearing simply because of how good it looks on Leighton.

Jared is someone that has really come far when it comes to his career and also fashion. In this photo, you can see Jared rocking his Crocs in an ash color with his black and white outfit.

It looks really good on him.  Jared wore the Crocs to Byrant Park, New York City way back in 2006. This might seem a bit old but Jared rocked this Crocs so well and his fans loved it so much.

He influences a lot of them to purchase these Crocs.

A lot of fans are so much in love with Umar Thurman’s outfit as she wears her Crocs in a stylish way with her spouse. You can see from this photo that she wore the Crocs on the set of ”motherhood” in Greenwich Village on May 29, 2008.

You can see how good she looks while rocking Crocs in her casual outfit while holding her handbag in her hand. This looks really good and her fans will love to get these Crocs as well.

Fans of The Game feel that he has not got any game when it comes to fashion. Despite the fact that The Game arrived in a Rolls Royce, he wore something which his fans do not find attractive, he wore a black Crocs with white socks.

Fans do not find this attractive at all. His fans will love to get the Crocs, but I am not sure that they would love to rock the Crocs with this.

Steven Tyler is another Celebrity that has not been left out when it comes to rocking your Crocs with a casual outfit. His fans feel that Steven really knows how to rock the stage, but he did not really rock the Crocs so well as he wore a navy Crocs while shopping.

Despite the fact that fans don’t like how he rocked the Crocs, it still looks good on him. You can see in the photo that he wore the Crocs to a shopping trip in Maul on October 23, 2009, he was about to get into his vehicle before this photo was taken.

Rossie is someone who does a very good job in rocking red Crocs. You can see that he rocked his red Crocs with a red top which also matched with the American flag.

She stepped out and then she walked towards a boat and climbed in.

Why she was on a boat is because she went on a boat trip with her Crocs. It looks really good though and her fans would really love to get theirs as well.

Look at how good the Crocs look on her legs and with her outfit.

With the way celebrities are rocking their red Crocs these days, it seems there is something special about it, we would find out.

In this photo, you can see how Paul Rudd rocked his red Crocs while he was in the set of ‘My Idiot Brother’ in Manhattan.

This looks really good and his fans loved how he rocked it as well, they will also love to get one for themselves.

Kate, who is a reality star mom literally has to keep up with her kids. Despite being a mom, she has not disappointed one but when it comes to her style.

Because of her eight kids, when she wants to dress, she will definitely choose comfort over fashion, so you should not blame her at all.

You can see her rocking her Crocs with her hoodie as she goes to the Thanksgiving holiday weekend on November 28, 2010.

Harry never disappoints when it comes to wearing good footwear. Harry wore his navy Crocs with a casual outfit while going to the ”Late Show with David Letterman” on June 10, 2010.

Harry rocked his Crocs so well and his fans are also in love with his outfit. It looked so good on him because he is so good at rocking his footwear.

Mario is a celebrity chef that has very good taste in the kitchen but does not when it comes to fashion and outfit, his fans are not so impressed with how he turned out and rocked his orange Crocs.

However, it was not so bad on him though, he wore it to the ”Good Morning America”.

Because of how celebrities rock their Crocs and show it off on social media, fans are Influenced by this and they will love to get Crocs for themselves.

Apart from celebrities endorsing Crocs, Crocs are also good footwear to wear majorly for your casual outing, when you are on set, or when you are just going on a stroll or taking your dog on a walk.

You can even wear it to the beach to chill and have a fun time. There is a link where you can get any Crocs that you so much like and prefer.