The major difference between Aquaseal and Shoe Goo is their components. Shoe Goo is made of styrene-butadiene, synthetic, toluene, tetrachloroethylene solvent, and naphtha.

Aquaseal components include polyurea elastomer, amine-terminated polyether resins, amine chain extenders, and MDI prepolymers. Aquaseal is a waterproof urethane adhesive, it has a clear appearance. It becomes flexible when it cures.

Shoe Goo is most commonly used on shoes. Another major difference you’d notice between the two adhesives is their curing time. 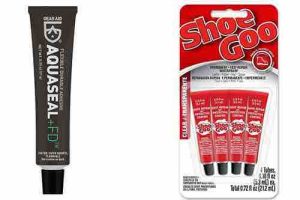 The two who started the company in 1981 were Duane and Nancy McNett. They began with the importation and distribution of expensive rain gear for golf players.

Then they began getting requests for repair kits from customers to fix the flexible rubber suits.

Aquaseal was born when the company developed an adhesive that repairs wetsuits, waders, and other flexible water gear, hence the name, Aquaseal.

In time, the company they imported gear from went out of business. The McNetts decided to develop more products around the Aquaseal formula.

They discovered that the world of water gears needs more products like Aquaseal. For example, scuba divers are some of the people who would benefit from their products so they began exploring that area as well.

In 2015, the McNetts retired from the company and sold the company to Coghlan’s LTD, a maker of cookset and camping accessories.

The new company decided on a name change to capture more appropriately what the company does. They chose Gear Aid.

The company makes other products besides Aquaseal like SeamGrip, Revivex, and Tenacious Tape.

Eclectic Products based in Eugene, Oregon makes Shoe Goo. This adhesive is a specialized type of rubber cement. It was created in 1972 by an executive at Hughes Aircraft Co named Lyman Van Vliet.

He played tennis and decided to do something about the durability of his tennis shoes. Though he lacked deep knowledge of chemistry, he went ahead and prepared the formula that resulted in an adhesive polymer he called shoe goo.

Van Vliet marketed his new creation with the newly formed company, Eclectic Products. First, he targeted folks who played and wore tennis shoes by placing ads in tennis magazines. His wife supported him by approaching tennis shops with the products.

In the first year, only 22 orders came in. Then in 1974, they approached Kmart asking the retail giant to adopt Shoe Goo. By the 1970s Shoe Goo was gradually becoming a thing with joggers.

Ten years later, the company had employed 15 people and had raked in $2 million in annual sales. By 1976, the company opened a production facility in San Pedro.

Operations were moved to Eugene Oregon after Eclectic Products was sold to Willamette Valley Company in 1988.

Knowing the specific use of each of these products allows you to use them properly and get the needed results. Furthermore, knowing the components in each of the adhesives is great for updating your knowledge base.

If you are a skateboarder, it is important to know which adhesive is better for repairing your sneakers.

Let’s take a closer look at the two adhesives.

Similarities between Aquaseal and Shoe Goo

The following are the similarities between the two products.

Both Shoe Goo and Aquaseal are produced in clear colors. If you have used Shoe Goo before you’d have noticed the clear white liquid which is ideal for most materials and fabrics. It comes in a tube that you can squeeze to let out the adhesive.

Aquaseal shares this similarity because it has varieties in clear colors too. You’ll be able to use Aquaseal on your worn shoes – even though this isn’t its primary purpose – if you want a neutral look after the work.

You can use it on wet gear like swimsuits or underwater suits. These gears usually come in dark colors hence a clear liquid adhesive blends in well.

Adheres to most fabrics

Shoe Goo adhesive was developed primarily to repair shoes, as the name suggests. It can be used on leather shoes.

There are many sneakers and tennis shoes made of leather. It is the same with Aquaseal which can be used on shoes and boot seams some of which are made of leather, waders, wetsuits, booties, gloves, tarps, awnings, and all such materials that are exposed to wetness.

Both adhesives are waterproof. Shoe Goo easily repairs shoes and dries to a waterproof and flexible rubber. Just make sure to work and spread the adhesive into the desired hole or spot on the shoe.

When it dries or cures, shoe goo provides waterproof protection over the repair location.

Aquaseal shares the same similarity with shoe goo in this regard. It will form a waterproof membrane on whatever fabric or bond.

This waterproof function in both adhesives is why they cure in a short time and stay dry. It is also why they offer excellent abrasion and sealing functions.

When applied to holes in shoes or tarp, both adhesive blocks water from coming through the holes.

If it’s a shoe you apply Aquaseal or shoe goo to, you’ll not have to worry about water sipping through the seams or soles.

Even though the first versions of the adhesives were clear liquids, they do not always look invisible on all fabrics.

For example, when you apply either Aquaseal or shoe goo on black shoes, tarps, or swim gear, there’s a tendency for the cured adhesive to appear metallic.

This is why both products are now offered in black colors. The Aquaseal NEO offers the adhesive in black liquid so that you can use it on materials and fabrics that are dark in color.

Most swimsuits and outdoor tarps are manufactured in dark colors. Aquaseal NEO blends in with the dark fabric.

Shoe Goo has the black version too for repairing shoes – preferably black shoes or other fabrics. With the black goo, you don’t have to worry about the white appearance of shoe goo after the adhesive cures.

Before you buy any of this adhesive, you have to determine the sort of finish you’d like to see, a gooey white one or not. You can tell Shoe Goo Black from the other version easily.

One important thing about adhesives meant for fabrics is that they must be flexible. Shoe Goo and Aquaseal both have these properties. When they cure they are flexible.

When applied to open seams in shoes for example, Aquaseal and Shoe Goo bond the fabric together but they don’t become hardened.

The adhesives maintain a rubbery nature that allows the shoe to be flexible in the seams. You can continue to use the fabric normally after the adhesive cures.

Both products work alike in that they provide abrasion resistance. This means when applied and adequately allowed to cure, the sealants can withstand scrapes and scratches.

For example, skateboarders love shoe goo for this major reason. Skateboarding requires some roughing and scraping as they conduct various tricks on the board.

With abrasion resistance, the shoe lasts longer. Aquaseal is even known to outlast the shoe itself.

Both products can be used on a wide range of materials and fabrics. Many users have found more uses for both adhesives other than what the manufacturers intended originally.

Differences between Aquaseal and Shoe Goo

Even though the two adhesives share a lot in common, they have the following differences.

Shoe Goo and Aquaseal don’t have the same material components in them. Shoe Goo is a specialized type of rubber cement made of a synthetic rubber called styrene-butadiene, a solvent known as tetrachloroethylene, and a cleaning and degreasing agent called solvent naphtha.

These are components that make Shoe Goo very effective for repairing shoes, as intended by the makers.

Aquaseal is a urethane-based product. Urethane is a sealer, which makes Aquaseal such an effective bonding agent when used on holes in shoes, tarps, or other materials.

It also contains amine-terminated polyether resins which give the adhesive its anti-wear properties and makes it harden when it has been applied to the fabric.

However, these combinations are all trademarked by makers of Aquaseal and Shoe Goo.

They are both clear gooey liquids. Except for the versions that are colored.

But when they have both cured, you will notice that Aquaseal maintains the clear liquid or metallic color.

Shoe Goo changes from a clear color into a noticeable white. This is why if you are using shoe goo, be sure not to use too much at a time in order to minimize spilling off the edges of the seams.

For a neater job, use just enough to bond the seams of the shoe you want to repair.

You can avoid this mess by using a dry cloth to wipe off the excess of course.

Both products come in different tube sizes. Shoe Goo generally offers bigger sizes than Aquaseal. For this reason, you may consider Shoe Goo as worth more money than Aquaseal.

Aquaseal may be small though, but it works in mighty ways. One tube of Aquaseal can repair several gears at once.

However, you are going to make your choice based on your particular needs, budget, and the fabric involved.

There’s a difference in price, which is expected since they don’t offer the same sizes. Aquaseal is smaller and cheaper than Shoe Goo.

Which is a better product?

In the final analysis, Aquaseal offers a wider range of applications than Shoe Goo.

Note that Shoe Goo originally was made for shoes. Now you may use it for other materials too. For example, in the absence of other appropriate adhesives, you may use shoe goo to mend your tarp or swim gear.

But Aquaseal was specifically prepared for swim gear or other fabric that can get wet. And it can also be used for shoes and give you a perfect result.

You can’t really say the same for Shoe Goo.

Besides, Aquaseal gives you a more professional finish because it doesn’t change to white color when it is cured.

There are glues and there are glues, but very few glues come close to the effectiveness that Aquaseal and Shoe Goo offer.

And from this comparison you can also see that though the two adhesives may look alike, they do not have the same components. This also means you shouldn’t expect the same efficacy.

The results are similar, but Aquaseal outlives the shoe or fabric which gives the product the upper hand in this analysis.