The shirts used at Chick-Fil-A restaurants are uniquely made and all have a specific meaning attached to them.

Chick-Fil-A has its staffs wear Polo in different colors not just to differentiate the restaurant’s workers from others, but to further categorize their workers and also specify each worker’s duty in the restaurant. 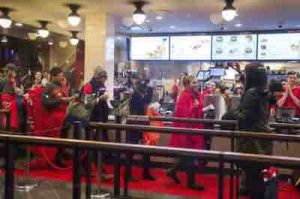 There are three main colors of Polo used by Chick-Fil-A restaurants. These colors might look more like a mere uniform for customers who come to eat, but it will interest you to know that each color signifies a particular role the wearer of this color is expected to play in that restaurant.

In this article, we will discuss these colors for better understanding so that you too will have this knowledge and also know who to talk to when you visit any of the Chick-Fil-A restaurants around town.

Colors of shirts at Chick-Fil-A restaurants

You should know that the different shirt colors in Chick-Fil-A mean that there are differences in position or even roles played in the restaurant.

We will further by defining these colors for you.

The Red Polo means a team member. When you walk into the Chick-Fil-A restaurants and see someone wearing a red Polo, they are marked as team members.

A team member with Chick-Fil-A is someone who performs food preparations and guest service duties.

By guest service, I mean members of Chick-Fil-A who greets guest or customers, address them to their reserved table, they also take orders from these customers, and also they tend to complete cash transactions at the cash register.

These among other things are what the team members at Chick-Fil-A do. They wear red as a means of differentiating them.

Differentiating them in some sense can serve as a motivation to want to work harder in order to advance to the next level which is a team leader and these are people who wear a different color of shirt from the team members too.

Another thing the team members do is that they are responsible for food assembling duties just as I’ve mentioned earlier, they cook and also assemble sandwiches for delivery.

So when you walk into the Chick-Fil-A Restaurant and you see someone walking up to you wearing a red Polo do not be frightened because for once red in this place is not used as a warning color rather it symbolizes the color of enjoyment as this person will only make you feel comfortable while you await your order.

The Blue Coloured Polo is worn by the team leaders. In this case, I have a feeling that we all know what a team leader does.

It is no different with the Chick-Fil-A Restaurant as they are assigned or rather responsible for supervising assigned stations to workers for an entire shift.

A team leader can also be assigned to open or even close the Restaurant in the absence of a manager following the established protocols of opening and closing the Chick-Fil-A Restaurants.

This set of workers are not always seen around as their job is to ensure everyone else is doing their job so in rare cases, you will see them walking around the Restaurant addressing and taking notes of happenings.

They are likely the ones to come up to you first in the case of any inconvenience even before the manager or someone with the higher authority comes to you.

Working as a Team leader is not an easy task at the Chick-Fil-A Restaurant as you have to make sure every other person does his/her job on time in order to avoid causing any inconvenience or disappointment to guests and customers in general.

The Dark Blue Polo is worn by the Shift leaders. These are set of exalted workers that play the main role of a manager.

As a manager is an overall boss, the manager takes care of the overall inventory the budgets, and all other financial and technical-related problems by assigning someone to take charge after providing the necessary means of sorting the issues at hand out.

A shift leader on the other hand is responsible for overseeing the staff ensuring they are up to time with their activities and also ensuring that customers are well taken care of and are satisfied.

Shift members at the Chick-Fil-A Restaurants are responsible for the day-to-day TASK and DUTY management.

They make sure the restaurants’ system is running fine and according to protocols and plans in an attempt to avoid any inconvenience whether natural or man-made.

This set of people also ensures that their team leaders have all it takes to ensure that team members are performing their duties with no hindrance of any kind.

Working at the Chick-Fil-A Restaurant is a collective thing and also not an easy thing as they tend to have a vast number of guests each and every day.

It makes sense that the division is done in such a way that the workers can look unique while attending to guests.

They are recognized vastly because of the competitive food they present to guests.

The whole idea of having different colors of shirts for Chick-Fil-A is all based on David Rissier, a Chick-Fil-A innovation manager.

He said because “You are what you wear”.

aware of the definition or reason behind the color variation in Chick-Fil-A Restaurants.

Workers at the Chick-Fil-A Restaurants are rather motivated than demotivated to work harder in order to have a change of Polo.

It is competitive, it is fun and it is amazing working at the Chick-Fil-A.