Back in the days, Chuck Taylors Converse was worn by basketball players, but then it was argued that it was more of a fashion statement than its suitability for playing basketball. 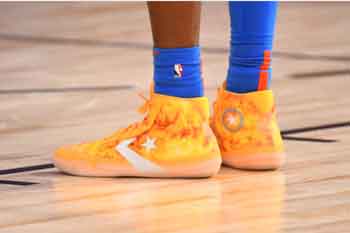 Although, it is fair to say the Chuck Taylor series lacks all the support, firm grip, and comfortability that modern basketball shoes possess, and won’t exactly fit into what we can call a basketball shoe. There are modern Converse designs that have broken through that limit and can now be worn professionally.

Makes so much sense, doesn’t it?

So, can you wear Converse shoes in the NBA?

Although the Converse was worn in the ’80s as a basketball shoe, not much of it can be said to be worn recently. Converse has since grown beyond its popular Chuck Taylor sneakers into more brandable basketball shoes, but it seems a lot of basketball players are no longer interested in using the sneakers as before.

Still, it is believed that Converse shoes can and should be worn in the NBA. In fact, a number of basketball players have worn the Converse shoes professionally. We will get to them later in this post.

What Converse basketball shoes can you wear?

Just like there are a lot of different shoes or sneakers of different brands makes it the same with Converse. Converse has different basketball shoes and I’d be listing them in this article.

The material helpss your feet firmly and provides the balance necessary to be a better basketball player.

It has a very nice color and it has perfect support. You can drip with a nice pair of joggers and your animated shirts or even your layers of sports clothes.

They are just perfectly made for anything you want to do.

Do any NBA players wear Converse?

Back then when basketball started, chuck Taylor all stars Converse was one of the first shoes to be worn by basketball players. As basketballâ€™s popularity continues to grow Converse still sees the need to make shoes for their players and for other athletes.

They sign basketball players for a multi-year deal and they also name Converse shoes after them. For example, Draymond Green was signed by Converse after he had a contract with Nike and now a Converse shoe was made after his name which is the Converse G4.

Basketball players have made it part of their shoes to wear in NBA because of the design of the shoe which is the sole that is made of rubber, the laced up outer material, the fabric made with leather, and the colors.

Even Converse as a company now makes more shoes for athletes to wear.

Which NBA players wore Converse in 2020?

In this article, I would be sharing a few information about those NBA players that wore Converse in 2020 and why they wore it. In the year 2020, Converse signed a few NBA players to wear their sneakers plus they also offered an endorsement deal with them and one of the players that were signed is 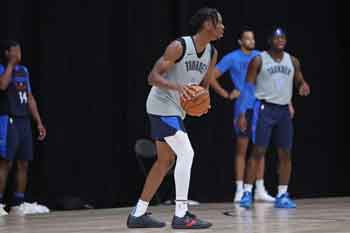 Shai Gilgeous-alexander is a popular NBA player for his City Oklahoma. He was signed by Converse on Wednesday which was on the 8th of June 2020 and he was added to the group of WNBA and was also tasked to relaunching the category of basketball.

He was signed to join Draymond Green, he wore the Converse all-star pro-BB in Orlando, Florida. Converse celebrated the athlete because of his individuality and progress, he wasn’t just signed by just Converse, Nike and Jordan also signed him before he sustained an injury on his right foot which denied him of playing a few matches. 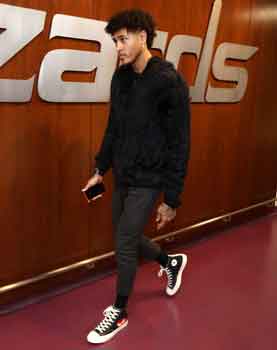 Kelly Oubre Jr is an American NBA player for the GSW- Golden state warriors, he was also signed by converse as he agreed to the multi-year and appeal deal of footwear with Converse.

He was also signed by Nike and as it has been known that Nike bought Converse in the year 2003, Kelly Oubre Jr, would wear the Converse off the floor and wear the Nike while playing on the court. The all-star pro-BB soul collection was inspired by Kelly Oubre Jr which is a flag to the return to the game. 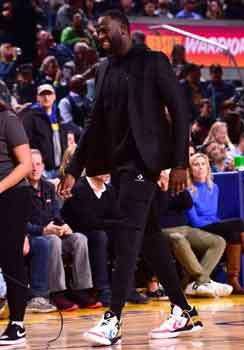 Draymond Green is an NBA player that has the highest profile in the Converse brand. Converse signed Draymond green in March 2020 and he was made the brand’s highest-profile star.

He also debuted the Converse G4 on the 5th of March 2020 in a match played against the raptors. People were surprised that he signed with Converse because he was under a contract with Nike for a few years. He was so happy with this opportunity.

What other sports can you wear Converse for?

Back in the 90s, when Converse started making shoes for athletes, they look at the fast-moving sport before they go ahead to make shoes.

According to my research, basketball was the first sport that Converse noticed to be growing fast before they decided to start making shoes for them and other sports.

Converse isn’t just for basketball, there are a lot of other sports that you can use Converse for, and even after Nike bought Converse, they still continued to make shoes for sports.

Converse was designed for different purposes and people wear it for one reason or the other while for some people that feel that only basketball players can wear the Converse, in this article I would be sharing with you other sports you can wear Converse for.

Almost all Converse are great skateboarding shoes and Converse has an entire part or line that was dedicated to skateboarding plus right from the start.

Recently, Converse released shoes for football players and they are in the Chuck’s Converse series. The shoes were released in 2020 towards Nigeria’s independence day and it was also designed with the color of Nigeria-green white green. The design was inspired by the team’s Jersey.

Converse also made shoes for women who play volleyball and they were well designed in Nice colors and it can also be designed the way they want before the shoes are delivered.

Tennis is a game in which one player from different countries has to compete with each other. Converse also made it easy for tennis players to get the pair of shoes that are made comfortable with a low top and also granted their request of having their shoes designed in the color or arts they want before they are being delivered to them.

The tennis Converse shoes are in the chuck’s Converse series you know the All-star Chuck Taylor Converse.

Handball is a team sport in which two teams have 7 players each. This sport is not played by just the males, the females also play. We have male handball and female handball players.

Converse made shoes for handball players to purchase and also granted the request of the players to have their shoes designed the way they want before they are being delivered. 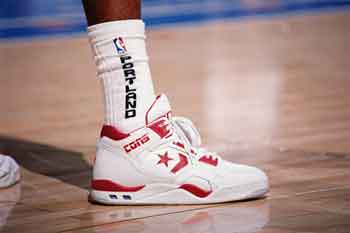 To be very honest, after all the research I’ve done I can tell you that Converse has made it easier for athletes to purchase the sneakers of their choice according to the sport they play and all.

You no longer have to worry about if the shoe is for a basketball, football, tennis, volleyball, or skateboarder, Converse have made different shoes under most series for players of different sports to purchase.

Although Converse was bought by Nike in the year 2003, they still retained their name as converse and still signed sports players in their company as converse signed players.

The only sport that doesn’t make use of converse is runners because they sustain injury when they make use of the converse shoe to run as it does not have the support they require although converse made a shoe for runners.

I hope I have been able to answer all of your questions properly. Let me know your thoughts in the comments below.