The major difference between the Gripfast Boots and the Doc Martens Boots is based on their durability. Doc Martens shoes are more durable than Gripfast. 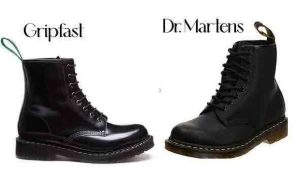 The manufacturers of both boots are very competitive in that they have made these boots to be top-notch and of great quality in essence.

The argument about which one is better is gathered up to be based on one common trait that everyone goes for when spending much amount of money on footwear which is the footwear’s durability.

The reason for this comparison is with regards to so many questions flooding the internet by boots lovers who can’t seem to tell the difference between both brands’ boots.

Seeing that both boots are credible and all unique in their own way, it is a tug of war to try and understand their differences by just wearing them.

The feeling you stand to feel when you wear either can be confusing in trying to differentiate them, which is where the purpose of this article is duly represented.

This comparison is to dig out critical and technical differences and similarities that both boots and brands in general share.

Let’s get into business!! 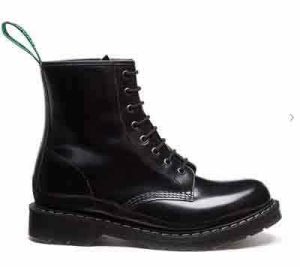 These are Boots that are made using Goodyear welt method. Goodyear welt is a Strip of material that can be leather, plastic, or even rubber.

The placing of this material is what makes it unique and outstanding and also what contributes to the magnificent appearance of the Gripfast boots.

This among other unique and credible materials is used in beautifying the Gripfast boots and also boosting their durability, credibility, and functionality.

Gripfast, with over 130 years of experience started with a very small beginning up to the very present day.

For a company that has gone from strength and more strength, in 2006 they then had their products being distributed to all four corners of the world, that was however just the beginning.

Gripfast has managed to secure its name in consideration of outstanding boots with great performance and durability. We shall review more of Gripfast production as the article progresses. 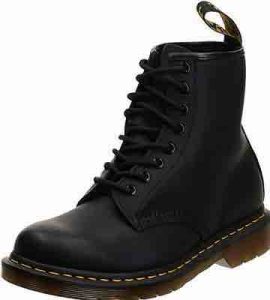 Now talking about footwear with unconventional beauty and taste, Doc Martens stands out in most aspects that are related to considering great and comfortable footwear.

It is safe to note that the Doc Martens have a special place in the hearts of the British people.

This brand has left an untouchable mark on the British culture, coming from Germany and not England, they managed to be an essential feature in the British collection of Classic and top-rated footwear.

The Doc Martens is an expensive Footwear that is truly worthy of the price tag.

They are functional and are durable, in fact, the Doc Martens boots are known to last a duration of 20 years with proper maintenance, grandpa will definitely have something to give to his grandchild in 20 years’ time that’s if they run small or you feel like passing on something to the younger generation.

One fact about the Doc Martens is their popularity, regardless of how much they cost and believe me, they are quite expensive, but regardless they happen to be popular and one of the iconic wears in Great Britain just as I’ve stated earlier.

Similarities between Gripfast and Doc Martens

As both are iconic Brands that are well represented by the quality of the footwear they produce, there are bound to be similarities that both brands share in the sense of their finished products.

What’s funny is that most of these similarities are just lying around but we hardly notice them.

We will be reviewing a few of these similarities shared by both brands, this is in order to further clarify whatever doubt you might have with regards to either brand.

The sole traction of shoes made by individual brands is credible, in fact, it is one of the reasons they are well-loved and come recommended. They can be worn on any kind of ground. This also contributes to their versatile use.

Both brands make use of leather, they have this in common.

However, it is the kind of leather used that differs but most of their footwear if not all is made with leather.

Yes, both brands make footwears that are water-resistant. This is in fact one of the features that contribute to their durability.

I’d like to imagine if either brand will truly be durable as they are if they didn’t have this feature of being water-resistant.

Yes, they are durable. The durability of each brand however varies and it is something we will review in the next part of the article.

It is nevertheless only fair and factual to admit that shoes made from both brands are durable and will go a long way with you through thick and thin.

Comparison between Gripfast and Doc Martens

In this part of the article, we will be comparing both brands to see which one stands out in the littlest way possible.

We have a lot of criteria of what to use in comparing both brands and I must confess I am more than excited to get on with this comparison.

The reason for this as I had stated earlier is in order to further understand which of these will serve better and in what condition, and also to know which one stands to be a great investment.

Let’s get to the comparison already!!

These are the features of the popular 10 eyelets Gripfast boots. it is one of the popular and leading products from the collection of footwear made by Gripfast.

This pair of boots are functional and they fit on all occasions. They are very strong and durable.

They also have some protective features installed like the protective toe cap, the triple stitch to ensure it is water-resistant, and also the vamp that is made with an assurance to make sure it lasts longer and still maintains its initial form of beauty.

We shall define more of its features as the article progresses.

Doc Martens is considered a legend with most of their productions. This is the classic 8 eyelets Doc Martens boot that has a lace-up closure in order to ensure a customized fit and perfect grip.

The 8 eyelets are just perfect to ensure that the boot gives a normal fit regardless of the kind of foot you have.

Just like the Gripfast, this also has protective features installed which we will make more reviews on as the article progresses.

One thing the Doc Martens and the Gripfast Boots have in common is the grip tabs installed at the top of the boots’ collars which are placed in order to assist the wearer to have an easy slip-on when they want to wear their boots.

You can see that it only gets interesting more and more as the article progresses.

I don’t know about you but hell, I am going for the Doc Martens in consideration of this.

The Gripfast ten eyelets Boots can be gotten at a price range of within $139 or more, depending on the store you are making your purchase from.

The thing about the price of each boot here is that it might vary as time goes on and also depends on the store you are making your purchase from.

Also, in this part of the comparison, the Doc Martens is considered more expensive compared to the Gripfast, the fact is however that it is a safe and great investment.

This part of the comparison is a bit sketchy in the sense that both shoes are water-resistant, but one is waterproof.

The Gripfast boots are waterproof while the Doc Martens are only water-resistant.

This means that with excess water exposure your Doc Martens is bound to react and in this case be damaged by water since it is only water-resistant, which means there is a certain amount of water it can take.

The Gripfast however is water-resistant and also waterproof.

The argument of which one has better arch support has been settled here.

The fact is the Doc Martens have better arch support that comes inbuilt into the shoes when manufactured.

The Gripfast, however, does not have a supportive arch, nevertheless, you can install your own insoles that will support your arch at the level needed.

Why you should buy Gripfast Boots

Based on the reviews done on this particular product from Gripfast. The popular ten eyelets Gripfast boot is iconic wear that covers a vast area of need in today’s world.

It has a steel toe which enhances the protective features of this particular wear a lot more when compared to other boots with the Doc Martens inclusive.

The Gripfast boot is made to offer a perfect fit, regardless of the surprising feature and also the protective features it has, these are sometimes details that affect the fitting of some of the footwear.

It should interest you to know that the Gripfast gives a perfect fit and a fast grip even with the features it has installed in it to make it a better version of some of the boots out there.

To keep it short, owning a pair or two of the Gripfast boots should because you value comfort and protection a lot more than just fashion and looking fancy.

Even though they do not last as long as the Doc Martens, 10 years is surely a long ride for less than $200.

Why you should buy Doc Martens Boots

The Doc Martens are popular and most recommended brands by a lot of people who know too well about some special footwear.

This brand has managed to leave a trail of professionalism in its creation that has so far looked unbeatable.

I mean 20 years of solid satisfaction and protection from natural and manmade disasters like bad roads and terrains, in general, is a long way to go right?

And then to top it all, for just 200 bucks, I don’t know about you but I sure know where I’m spending my money at.

The Doc Martens 8 eyelets boot also offers a great fit, the shoelace is flexible and lets you customize your own fitting.

They are strong and comfortable and very durable just like we have discussed.

Now you have a better understanding of both shoes. You now know some of their pros and then the cons.

With all said and done here, choosing one that suits your personality is up to you. This comparison is done to help you make that decision with a certain level of confidence.

If you are however interested in knowing what my choice is then I will be going for the Doc Martens 8 eyelets boots and this is because I look forward to passing something down to my grandkids and 20 years is just about it.