Launched in 2000 by Heely’s Inc previously known as Heeling Sports Limited, this skate-like footwear became a must-have due to its rare and unique structure and build-up in the early 2000s.

This high demand led to its scarcity at that time, with shoe vendors finding it difficult to keep up with its demand by adults and most especially children and teenagers despite its sales in 7,400 stores globally.

Reports show that at a particular period more than 4 million pieces of these shoes have been bought by parents for their less than 5-year-old children.

However, this footwear started losing much of its popularity in 2007. 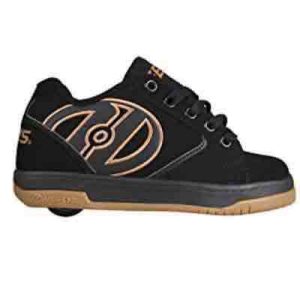 Heelys are versatile shoes that are built with wheels in their heels which could help you switch from walking to heeling by the adjustment of your feet’ posture and by a shift of your weight.

However, the downside of this design is that makes it nearly impossible for you to work a long distance in them without rolling.

With these shoes on, you have to ensure that your feet don’t catch too much pavement, and every step you take lands your feet on its balls else you will surely start rolling hard which could lead to falls, injuries, and even shin splints.

And even though this didn’t seem like a problem to children who were only concerned about putting on the trending shoes and rolling through road traffic, malls, and corridors.

It was a red flag for most adults, especially parents because they saw the design as a way by which they and their kids could easily get injured.

Its wheels are also not retractable, so to avoid slipping while walking, you have to remove its wheels anytime you want to wear them and also fix them back whenever you want to go heeling.

The fears of most parents concerning the Heelys’ design being a threat to their kids became a reality when kids who wore the shoes began to sustain injuries at an alarming rate.

It was included in the list for 10 worst toys at that time and several cautions about it were published by different medical institutions after the death of a 12-year old boy in Massachusetts and critical injuries sustained by two other teenage boys were attributed to the wear of wheeled sneakers.

In addition, in a period of 10-weeks during the summer of 2006, at least 67 children (56 girls,  11 boys) had broken their elbows, arms, and wrists and were admitted into a hospital in Dublin with all cases attributed to the sneakers-on-wheels.

Furthermore, a 12-year old was also hit by a car while crossing the road in his Heelys.

A 9-year old girl named Katrina suffered a concussion after losing her balance while she was heeling in a mall, and two teenage boys from New Jersey were also hit by a car and sustained several injuries when they fell while wearing wheeled sneakers.

The release of a report by the United States Consumer Product Safety in 2006 also stated that wheeled sneakers cause at least 1,600 visits to the emergency room every year.

However, due to the sale of these shoes in shoe stores, some parents thought that they can be worn safely as sneakers and purchase them for their children without further purchasing other safety equipment for their children.

Although Heelys Inc. tried its best to educate the general public on the need to put on safety gear while heeling, the damages had already been done and sales had declined drastically.

And since Heelys is a sneaker that is meant to be worn corporately, and casually with jeans and a shirt like any other shoe, some people saw putting on helmets, knee pads for safety while being well dressed as a good reason to ditch the shoe for other brands.

The increasing number of injuries caused by this shoe led to its ban in schools, town centers, malls, summer camps, and even towns.

Somerset, a county in England, UK is ensuring that its citizens are safe from heeling and skating injuries by placing a ban on the wear of Heelys, roller skates, rollerblades, and skateboards in the district. This ban also prohibits the use of these items in car parks and town centers.

The district has also placed a fine of $500 on anyone who goes contrary to the order. Indigenes of the region are only allowed to wear Heelys if they remove its wheels and don it as a sneaker.

Even though certain individuals have expressed dissatisfaction over the ban, the region’s council chiefs have stated that the aim of the ban is not to stop them from having fun but to ensure their safety.

The town is built on a hill and could cause the rapid movement of the wheels under the shoes and cause several accidents.

Furthermore, following the ban of Heelys, parents no longer see the need to buy the need to purchase these shoes for their kids anymore since school is a place where kids stay most of the time. This led to a further decrease in the sales of the shoes and the brand’s popularity.

Nevertheless, even though the company has lost its popularity, it is still functional and still produces shoes under the same name.

It is now owned by U.S based company, Heelys Inc. which bought the company from Heeling Sports Limited which was run by Ruger Adams and Mike Staffaroni.

Roger Adams, who is known for his entrance into the Guinness book of record for being the youngest human to roller skate at 9 months old, got the idea of this invention when he saw kids flying on rollerblades at the beach where he went to find peace after his 21-year old marriage came to an end and he was fed up of his job as a clinical psychologist.

He ran the company along with Mike Staffaroni – an expert in the skate and footwear industry until he decided to sell his stock in the company during its downtime.

There has been some improvement to the invention of Roger Adams like the Heelys Nano board and Heelys double wheel shoes which is designed to help beginners learn heeling.