No, you can’t wear boxing shoes for wrestling. There are a lot of sports like football, volleyball, boxing, wrestling, etc. with different shoes made for them.

Some shoes made for a particular sport can be used to play other sports like using wrestling shoes to fight in a boxing ring.

In wrestling, you have to involve numerous techniques like throws and takedowns, grappling holds, pins and there are also new additions of acrobatics, striking attacks, showing strengths, etc. 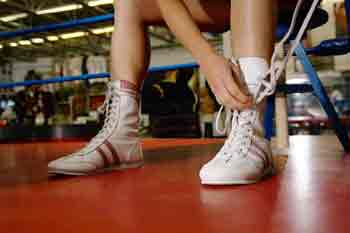 So making use of wrestling shoes is very important because they are made to offer or give ankle support and traction and they do this without hindering the flexibility of the wrestler’s ankles and feet and this is something the boxing shoes do not have capacity for, or ability to do.

So, why canâ€™t you wear boxing shoes for wrestling?

The texture of the soles

Boxing shoes cannot perform or offer the needed help to a wrestler while wrestling as a result of the texture of the soles.

In wrestling, the wrestlers need more grip from their feet to be able to withstand their component’s strength so the soles of the shoes need to be hard because the harder the sole, the more.

The grip in the canvas to the feet would be so that the wrestler would be able to push through it.

Wrestling shoes also have tread patterns that extend in the sole in form of a star pattern which allows the shoes to have traction no matter where the feet are acquiring pressure from and boxing shoes have soft soles which offer just a few channels of traction and that would not work during wrestling.

Like I said earlier about the techniques in wrestling, this would make the wrestlers move in different positions, their shoes have to work in every one of these positions, and the boxing shoes can’t help at this point.

So, do not purchase a boxing shoe for wrestling because it has soft soles and that can’t help during wrestling.

I am sure you know each sport has its own type of flexibility and you can also mention motion in this.

Boxing is an onward motion type of sport in which the feet do short movements in a straight position and here the boxing shoes can work but for wrestling.

It requires the move in different positions and a lot more flexibility from the feet or ankles and in this case boxing shoes cannot be used because they cannot allow the feet and ankle to move freely.

The level of flexibility required in wrestling is high because the wrestler has to move in numerous positions to perform different techniques and putting on boxing shoes could hinder the wrestler from moving to the position that could help to block the opponent’s throws.

For real, no one wrestler wants to be caught by a throw from an opponent, so it’s better not to wear boxing shoes while wrestling to prevent that from happening.

Are boxing and wrestling the same thing?

No, they are not. Boxing and wrestling are two different sports and they have different techniques.

In boxing, it involves controlling movements, throwing punches and also avoiding them, and doing a lot of jabs but that is different with wrestling.

Wrestling is much more open than boxing and it requires you to pin, throw and takedown, grapple, tackle, kick and punch your opponents.

All that I mentioned in boxing and wrestling shows the difference between them.

There is no kicking, grappling, and tackling an opponent in boxing while in wrestling these techniques are important to take down an opponent.

In these two sports, the way their goal is being scored is so different. In boxing to score a goal, you have to punch your opponent in the face at that point you know your opponent would not be able to get up so fast and that would give you a point.

When you look at things all around in terms of self-defense, wrestling is practical but it is so hard to learn, unlike boxing.

As a wrestler, you would be capable of grappling an attacker without getting him injured unlike boxing when you would throw some punches and the attacker would secure a lot of injuries which could involve comebacks like legal actions and all.

Aside from all this I mentioned which shows that boxing and wrestling are different, the historical gap amongst them makes them different too, and recently, wrestling has developed in various forms, while boxing has stayed more uniform.

You can also learn boxing in a short period while wrestling takes a longer period before you can be an expert in it.

What to consider before buying wrestling shoes

The cheaper ones lack some features you would need while the expensive ones have the complete features that are required and they come in different sizes depending on the level you are in wrestling.

The wrestling shoes you pick have to be lightweight so that you can be able to move your feet along with the shoes when wrestling.

When you pick a shoe in the store you have to look out for TPU, this TPU is usually located at the toe but some other wrestling shoes usually put it in some other parts of the shoe.

The TPU means thermoplastic polyurethane and it is a hard and lightweight type of plastic that is crack and abrasion-resistant. This helps your shoe to maintain a lightweight feature.

You have to know that all wrestling shoes have to be flexible and that is what differentiates them from boxing shoes.

When your wrestling shoe Is flexible it would allow you to be able to move to different positions and perform the techniques needed, the rate of flexibility required in wrestling is so high and a flexible wrestling shoe can do the needful during the game.

The sole of wrestling shoes is also very important and there are three types of soles which are- outer sole, mid-sole, and split sole. Each of these soles functions differently.

The split sole offers traction when you are being pushed off the mat and it allows flexibility in the middle part of the shoe.

It is located into two distinct in the rubberized section: one is in the ball of the foot and the other is below the heel of the shoe.

You would find EVA midsole in the description which means ethyl vinyl acetate which is a foam for cushion.

You have to consider ankle support when buying your wrestling shoes because your feet and ankle require more than enough support when wrestling.

The supports are always made high up to the ankle area to prevent the ankle from straining or rolling during quick movements as you know that wrestling requires you to move in a different position to be able to do some techniques.

What are the three popular wrestling shoes?

This shoe is one of the best and popular wrestling shoes that possess the mesh upper for breathability which allows air to pass through to your feet to keep it dry and it also keeps your feet comfortable when you are being pushed by your opponent, it has an EVA sock liner that is removable.

This shoe also offers you comfort, durability, and stability.

This shoe is stylish and popular amongst all wrestling shoes. For wrestlers that love fashion along with their sport, this wrestling shoe is what suits you.

It is available in white, collegiate navy, and collegiate Royal and also in various sizes.

This shoe has an advanced outsole, a nice upper construction- the two constructions are the mesh on the heel and the synthetic leather that is on the forefoot of the shoe.

The synthetic leather also works with the mesh on the heel to provide your feet with more air while offering no form of grip for your opponent.

The heel was made with a maximum grip outsole which makes it different from other wrestling shoes.

This shoe is one of the popular and best signature wrestling shoes. It is available in brilliant white and rich gold and it has different sizes. The size you pick would determine the price you will buy it.

This shoe has a laced-up part at the front of the shoe which gives a comfortable fit to your feet, it has a mesh upper for breathability and hi-top silhouette, it also has a synthetic leather overlay all through the upper to give durability in the stress areas.

Are wrestling shoes worth it?

Of course, they are. Wrestling shoes are part of the important things in the wrestling kit because they offer numerous supports and help to your feet while wrestling.

They keep your ankles from rolling or straining when you are being grappled or when you are grappling your opponent.

Aside from the headgear, mouth guard, and singlet, wrestling shoes are also very important because you would not want to slip off the mat when wrestling plus that could make you lose a point or a lot of points.

Trust me wrestling shoes are worth your money because you would need them to provide your feet and ankle the support it needs.

Boxing shoes are not to be worn for wrestling because they cannot or do not have the required supports or features to help your feet and ankle while wrestling.

Boxing and wrestling are two different combat sports because they have different techniques of which they are being played.

Before buying your wrestling shoes you have to consider the lightweight, flexibility, soles, and ankle support, and purchasing wrestling shoes is worth it because they would provide your feet and ankle the support they need.

I hope I have been able to do justice to your questions.

Kindly put down your comments in the comment section below.