We’ve all seen them. White people are always wearing shoes in their houses. Sometimes they neglect to take them off when they come into the house.

Their shoes are always dirty. And they don’t seem to care. But why? It’s true, white people wear shoes in their house, but why? 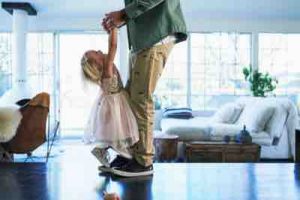 Discussed below are ten reasons white people wear shoes in the house.

In many European countries, the cold is often biting and freezing and everyone is trying to keep as warm as possible.

In cases like this, it is natural for house owners to not want to deny themselves or their guests the warmth a pair of shoes give them.

As a general rule, the pavements and streets of European countries are usually fairly clean and neat which means they don’t have to worry about shoes and mud as much.

Whether it is the house owner or a guest, they are rest assured there can’t be an unbearable amount of dirt in their shoes.

This might however be different in rural areas where there are dirty and muddy roads. It is usual to expect a slight difference due to the fact that the shoes might be heavy with mud.

But their clean environments are a prime reason most Europeans walk in the house with their shoes on.

Some European cultures simply believe it is impolite to tell a guest to have their shoes off before they come in.

Some assume it is outright rude because it sounds like an insult to the said guests, others go on to encourage their guests in by putting their shoes on in the house.

So, a culture that allows hosts and guests to go inside the house is created from there. This is not to say that certain European cultures do not find this unappealing.

A Spaniard would probably find a shoe in the house annoying while someone from, say Luxembourg city solves the shoe problem by wearing a different pair outside and another inside.

The European society is filled with people from all sorts of class. And as such, there is a manner ascribed to the treatment of each class.

However, save for a small fraction that forms an exception, people from the middle and upper class usually wear their shoes on the inside.

Mostly because they believe it is rude and uncomely to make a guest walk the house barefooted or in socks.

And so, everyone lives with wearing shoes on the inside till it becomes the norm to them all.

It is, however, easy for the lower class to grumble about this; they don’t have extra pair of paid hands cleaning the house for them and want their small mansions to be as sparkly as a crystal.

So, it boils down to psychology when dealing with classes.

The lifestyle of most European countries/cities is fast-paced and generally quick. Everyone wants to get to their destinations as soon as possible.

As a result of the quick lifestyle of most American and European countries, they may consider taking shoes on and off too much of stress and just wear them in.

Most of them have walkways and paved roads that lead right up to their doorsteps. So, save for a little bit of dirt, their shoes can be considered clean enough for an interior invasion.

White people love pets, anyone would find that hard to dispute. They have shelter for pets, a home for pets, private doctors for pets, nannies for pets, and so on and so forth.

But the point is white people love pets as much as they do their own children.

The repercussion of this is that they wind up having dog, cat, and alligator poop scattered all over the floor at times.

It does not happen every time, but it happens at least once.

So, while some have trained their pets to relieve themselves in less public places, others have given free reins to their animals. Now to prevent a sticky situation, the pet owners have to wear their shoes or some footwear inside.

And the visitors to such houses are not left out, usually.

Some white folks don’t it easy to navigate the new hard floorings common around now. Plush carpets have become too old-fashioned for people to use.

Instead, tiles, hardwood floors, laminates are what’s fashionable these days.

This means the floors are harder and more determined to pay back homeowners for all the times they were trampled on.

The floors cause pain on the feet, affect the heels, causing nerve pain and tissue damage.

Having flat feet is not peculiar to any one color or race of people. However, the whites solve this problem by putting on their shoes inside the house to protect it.

Having flat feet can be torture if the floor is hard. But a shoe can successfully cushion the effect of this.

This means that even visitors to the house might be allowed the liberty of coming in with their shoes. It sort of becomes a cultural thing when everyone needs their shoes inside.

As with any culture, a person can decide not to allow shoes inside their house. So, it can also be a matter of personal decision whether or not shoes are allowed inside the house.

For some, shoes in the house can pose a hygiene conundrum; they don’t want them in their house because they believe it’s not good practice.

But some might be just unbothered whether a fellow comes in with a shoe or he does so with his barefoot. To them, what dirt shoes bring in is equally insignificant.

Some belong to the school of thought that agrees the more dirt a person is exposed to, the stronger the immune system.

It also matters what cleaning methods are employed by an individual.

Fact that they’re white doesn’t mean all of them to employ the identical cleaning method. Some people vacuum their floors and clean it frequently during the week, so a touch of dirt wouldn’t irk them in any respect.

But someone with a less effective cleaning method might find wearing shoes within the house more disturbing.

Reasons Why A lot of European Cultures Wear Shoes Inside their Houses?

Many European cultures allow people to wear shoes inside the house for reasons like weather conditions, and their definition of politeness.

In many European countries, the weather may be frustratingly cold, harsh, and bitter. In other to combat this cold, it’s commonplace to work out people using thick shoes to warm their feet.

The shoes act as an additional layer of warmth and protection against the biting cold outside.

But what happens when Europeans get home? Do they throw their shoes off? Not entirely.

The host might switch to something more suitable for interior wear and also prepare warm shoes for visitors to his / her abode.

In the case there aren’t any provisions for visitors who communicate, then the guests are allowed to come back in with their shoes.

This can be perceived as rude in certain cultures, or perhaps in a private home, so you’ll always ask to get on the safe side.

Another reason some European cultures allow shoes inside is that they think it would be rude to create someone to kick off their shoes. So, everyone just rolls on with their shoes on inside.

And it’s not as bad because it seems, the streets are usually clean and neat. Whatever dirt the shoe herald would be negligible or easily cleaned off. 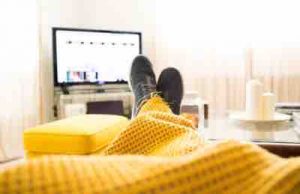 Americans wear shoes in their house and on the bed because they sleep in an environment that’s clean and serviced.

Many American homes weren’t built with shoes in mind, and really, why should they?

The streets right up to their doorsteps are paved and cleaned every day. So, there’s no fear of mud or any such dirt.

This might however show a discrepancy in rural areas; the shoes can develop mud, leaves, and whatnot. So, it’s rude and unwise to wear such disgrace inside anybody’s home.

It is also easy for Americans to wear shoes inside the house because their chosen method of cleaning is vacuuming.

They’ll just rouse, bored, within the middle of the night and begin the vacuum machine for lack of what to try to do.

And most of them don’t care what dirt is under the feet anyways unless they were observed to. In fact, many of them wear shoes inside their own houses.

Watching a number would be the most effective method for deciding if it’s okay to wear shoes inside anybody’s house.

Not everyone seems to be comfortable with shoes inside their homes, if you’re undecided, then ask to get on the safe side.

Why Do the Japanese take off Shoes in the house?

The Japanese have tatami mats that sit on the ground, in order that they embark their shoes at the genkan or entrance for hygiene purposes.

Unlike Americans, the Japanese build their houses with shoes in mind. The genkan, which is to mention entrance, could be a place reserved for beginning and putting on their shoes.

The Japanese have a culture of eating from these tatami mats rather than chairs. The tatami mats are spread on the ground and this can be mostly why slippers aren’t allowed inside.

It is possible to seek out Japanese houses with hardwood floorings. In such situations, they keep their feet warm by putting on slippers over their socks. But even the slippers are kicked off when going into a space with tatami.

For the Japanese, hygiene comes first. And their culture happens to be one that insists greatly on the shoe-wearing aspect of hygiene.

Japanese people can were shoes outside to other places like restaurants, shopping malls and also the like. But their culture isn’t limited to home alone.

Why Do Chinese Wear Slippers

It is common practice among Asians generally to not step into the house with shoes worn outside. Studies suggest this practice might need to be raised more as a precaution for hygiene than anything.

For example, bad luck said to be introduced by wearing shoes into the house is said to cause sickness to the occupants of the house. This might mean that the bad luck could be the germs that may be available from wearing shoes inside.

The rural areas where farming is that the mainstay of the day will have less paved roads and more muddy terrains to navigate.

This suggests that the shoes are usually looking dirty and muddy and unfit for interior wear.

But there’s also a matter of cold floors which is why it’s considered odd to run the house barefooted.

Instead, slippers are available in handy for the insides of a Chinese home. The slippers are usually dedicated fully for interior purposes only.

Chinese Wear slippers because it feels wrong to step in with muddy shoes and therefore the floors are too cold to be traipsed barefooted.