I have been wondering what NBA players do with their old shoes and now that my friend has asked me again. I decided to research and put up this post as a way of making sure everybody learns.

When shoes are signed by NBA players, they are usually sold at higher prices, and the person who pays more gets it. That’s how it’s usually auctioned. Sometimes, NBA players make use of them as practice shoes, only in rare cases will you see them throwing the shoes away. 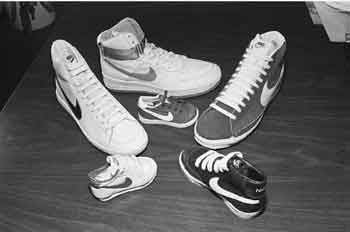 Most times, they are sold and this is one way the team generates income.  Remember that these NBA players get a brand endorsement from big brands, and because of this, they do not have to pay for kit or shoes.

They literally get paid by brands to wear their shoes. They can get as many shoes as they want. The signed ones are usually the ones sold at higher prices.

What happens to all shoes NBA players use

NBA players do not just dump their old shoes somewhere or in the bin. There are actually things that they do with the shoes which is what I am about to discuss in this segment of this article.

This is almost very easy to predict. We all should know that old NBA shoes are usually sold out to those who need it. This is one way that the team makes some money too.

This is not just done in NBA, even in other sports like football, their old boots are also sold to the fans who would love to get them. Selling the NBA player’s old shoes is the commonest thing that the club does with old shoes.

They are auctioned to the highest bidder

This is another thing that the club does, they auction the old NBA shoes to the highest bidder and most times, what they do is that they auction the shoes that have been signed by the NBA players.

This even gives them an edge and it also gives them the morale to sell it for a higher price than the usual. The person who is ready to pay the highest will be given the shoes. This is how bidding works. By now you are already aware that this is how it works.

They use them as practice shoes

This is another thing that NBA players do with their old shoes. Instead of throwing it away as some people do, they will rather save it and make use of it for practice shoes.

By making make use of it for practice shoes, can at still becomes of great importance to them. This is one good thing NBA players do with old shoes.

They give them away

NBA players who gave out their old shoes 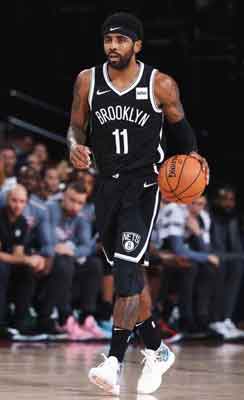 Kyrie Irving gave out his NBA shoes to a die-hard fan who was just a young boy. How he did it was that after his second preseason game with The Boston Celtics back in 2017, Kyrie Irving walked off the court in Philadelphia after the game, and then he noticed a young fan that was along the sideline wearing his Old number 2 Cleveland Cavaliers Jersey.

He noticed it and was happy to see such a young boy passionate and wearing his jersey. Kyrie Irving took out his Nike Kyrie 3 signature sneakers and passed them to the young boy.

The young boy asked Kyrie if he could sign it for him. On asking, he brought out a sharpie from his pocket for Kyrie to sign it. They now told Kyrie that he was his favorite basketball player, he told him he has his jersey and everything.

Irving signed the sneakers and said to the young boy ”I got you, bro”.  Kyrie gave his Sneakers because he saw a young boy so passionate and a huge fan. 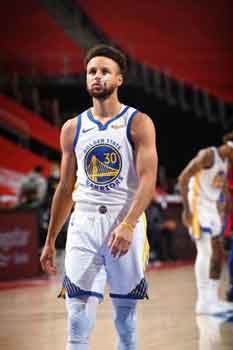 Stephen Curry gave out his old NBA  shoes sometime in 2016. This happened in Orlando Florida.

He found a fan with us two handwritten signs late in the game with a white poster board with a blue and yellow marker stating that not only is it the Fan’s birthday, but also, the fan had already saved up $400 just to make sure that he buys the ticket to be able to see Stephen Curry play during the game that the Warriors had to visit Florida that season.

After the game, Curry took out his white and blue under armor Curry 2s and gave an instruction to the team’s security guard to pass them to the young die-hard fan.

Curry walked over with the help of the security men to hand off the shoe to the fan, and unlike most NBA players, he knelt down to sign the toe cap of each shoe while the shoes were still laced up on his feet.

This fan had saved up $400 just to come to watch Stephen Curry play his game. This is the deep passion he had & that is what Curry saw on that signpost that made him give out his Sneakers to the die-hard fan. 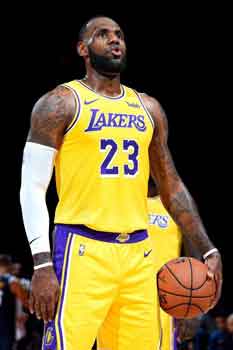 LeBron James caught the attention of the Grizzlies’ 23-year-old assistant equipment manager, Brainè Miller. Every year, she always wears an exclusive pair of LeBron James’ shoes, and LeBron James had always noticed it, but he never said anything to her.

On a fateful day, he unlaced his one-of-one, size 16 pair of LeBron 16s while he was seated on the bench, what he did was that he stood up and motioned for Miller to come over and get the shoes. James told her that she is a hard worker and he appreciates her so much!

She instantly broke down in tears while she was holding the sneakers tightly and getting a hug from LeBron James and the Lakers’ Security guard.

After LeBron James posted the video on his Instagram page, the video raked in over 7.2 million views and over 11,963 comments.

Miller confessed that it was a dream come true. Later, she reportedly passed on an offer to sell the sneakers for $100,000, stating that her loyalty cannot be traded for cash. 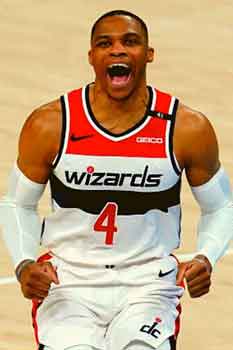 Westbrook also gave his shoes to a young kid after a game. Westbrook has once tossed his OKC-uni-clad fan, then instead of waiting to see the fan’s reaction after he had given him the shoes, he immediately sprinted off and went off to the locker room.

The kid was dumbfounded and didn’t expect it. Nowadays, in NBA games, kids do not really know what to expect. That is the fun part of it.  Westbrook said that when kids come to watch an NBA game and they get the opportunity to meet guys like him, he finds a way to connect with them which is by giving out shoes, jerseys, and also autograph. 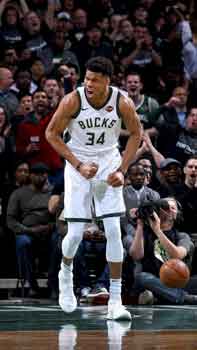 Giannis has also shown his generosity by giving fans his worn NBA shoes. He once gifted his shoes to a fan on her birthday after the Bucks Vs. Detroit Pistons game. He gave away his Nike Zoom freak1 to the lucky fan who had her birthday that same day.

It was a special day for the fan. Giannis gave the shoes just out of his generosity. He decided to surprise the celebrant and made the day special by giving out his shoe. 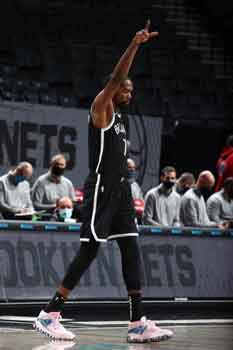 Kevin Durant cannot be left out in this famous trend of giving fans their already worn NBA shoes after the match.  Kevin Durant gave his shoe out to Bubba Watson who is a golfer.

After the match, sighted Bubba Watson and decided to send him home with a souvenir – his shoes. He walked up to him, gave him a hug, and then handed over the shoe he wore during the game. Bubba Appreciated it so much and his face was filled with a lot of smiles.

While leaving, Kevin shook hands with everyone around there and left. He gave Bubba Watson the shoes basically out of his generosity.

Anthony Davis has also joined the trend. One day, which was Monday night, the Los Angeles Lakers had a rare win in their recent slump of the season. They were able to beat the Orlando Magic who entered on a full rebuilding mode that season.

This was a surprise win for Davis and it made him so excited that he decided to give a fan his shoes worn in the game. The Lakers were in the giving spirit on the night of their win, Davis went on to give a die-hard Lakers fan a pair of his Trezz shoes as well as a signed Jersey.

This was a night of happiness for the Lakers, Davis gave the shoes out of excitement. 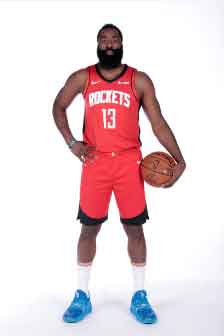 James Harden is also one of the generous NBA players who give out their NBA shoes after a game. A rockets Fan Travelled over 7000 miles from Taiwan to Minneapolis just to attend Game 4 of their first-round playoff series against the Minnesota Timberwolves.

Following the Rocket’s win that day, he spotted the fan, willingly autographed it, and gave the pair of shoes to the fan. He did this out of the excitement of winning the game and also because he spotted the Taiwan fan that wrote on a signpost that he traveled 7000 miles just to attend this game.

He felt the love the Fan had for him so he has no option but to give the fan his pair of autographed NBA shoes. 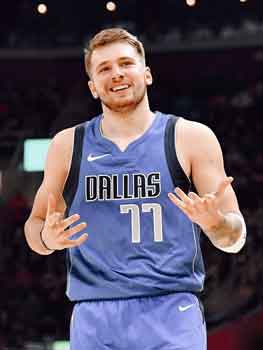 Luka Doncic has given out his NBA shoes to a 9-year-old boy from Kansas, at a certain Thursday night game. How it happened was that one of the coaches lifted the boy up after the match and took him straight to Luka Doncic. The boy did not believe what the Coach was doing at the moment.

After the game, Luka Doncic came over to the boy, untied his shoes, took both of them off, signed them, and then have them to the boy called Whitley. The boy had seizures, partial complex seizure of the right frontal lobe.

The doctor said that watching Luka Doncic could help reduce the chances of him having seizures. 9 months watching Doncic and not having the seizure is a very big thing, his mother said.

Damian Lillard made it public via his official Twitter handle that he is going to be giving out his Adidas D Lillard 1 signature shoes to kids who wear between sizes 12 and 12.5.

Kids later showed up at the venue called Portland, Damian also showed up and fulfilled his promise. He gave out the shoes to the number of kids that showed up.

He did this out of his own generosity and kindness. He cannot be left out when it comes to NBA stars giving out shoes.

All the shoes that NBA players use are either sold, auctioned, or even used as practice shoes. Some are even as generous as giving it out for free, some do it as a kind gesture, while some, out of the excitement and happiness of winning a match, can go as far as giving their shoes and jersey in one night.

These NBA players get paid to wear these shoes, so it is very rare to see them wear the exact kind of shoe twice. Once the game is over, some give it to fans immediately.