One of the features that constitute a major difference between the Danner boots and Merell apart from the logos is the remarkable difference in prices.

The wide acceptance of the Merrells boots has to do more with their price than their effectiveness considering the purpose which it was made for; hiking.

The brand is known for its affordable and budget-friendly footwear and continually makes it to the top of most reviews because it is durable enough when its cost is put into consideration.

The average price of a Merrell boot would be around $156, with the cheapest model roughly around $80 and the top-notch styles for $250.

Though not the best of the best, this brand provides excellent options for its price range.

The Danner boots on the other hand are quite pricey and the price tag of these shoes might have to do with the materials and the fact that they are designed and produced in the US and not in some hidden factory across continents where laborers are paid less than the standard wages.

Its durability, quality, and the materials used in the production of these shoes are reflected in their cost, and the Danner boots despite their pricing have garnered quite a number of positive reviews due to the specifications we will consider in the course of this review.

What is the Danner brand all about? 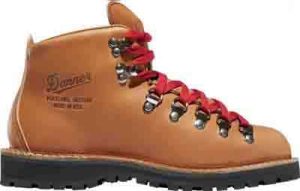 Based in Portland, Oregon, Danner is an ethical and long-standing fashion brand that makes use of quality materials and special production techniques to produce high-quality American-made footwear.

The brand story begins with Charles Danner and the Danner Shoe Mfg. Company in 1932. Danner’s initial plan was to make affordable and hard-wearing boots for his target market.

The Company which was initially set up in Chippewa Falls, a then logging town in Wisconsin would move its operations to Portland, Oregon due to the booming trade in timber in the region.

This successful business move served as one of the catalysts that would earn the brand its prestige apart from the reputation they garnered from satisfied customers who were impressed with their quality and affordable footwear, gotten for only $20.

The expansion of this brand is also related to a contract they got to supply work boots during World War II, like many other American manufacturers.

The increasing interest in outdoor activities like hiking, and camping also created a gap and need for durable footwear which Danner company has utilized with their wide range of outdoor footwear.

Their excellent reviews further catapulted the brand to be one of the most sought-after brands which resulted in an increase in production to roughly 480 handcrafted pairs of boots daily.

Going further, the brand collaborated with Gore-Tex, formerly referred to as W.L.Gore and Associates to make their first waterproof footwear.

This is what would birth the Danner Light boots made with synthetic materials and waterproof lining, it would become a sensation and a must-have for professional hikers.

In 1983, the Danner brand was sold by Bill and John Danner to Erik Mark on the premise that he would maintain the quality and production techniques that the Danner brand had kept for over five decades.

Nine years later, Danner would be merged with Lacrosse Footwear Inc. which is also based in Portland.

With two stores in Portland and supplies in dozens of online and walk-in stores across the World, continued footwear supply to the US Military, and several law enforcement agencies, we can say that the Danner brand has not been faulted in its promise to deliver quality.

What you should know about the Merrell brand? 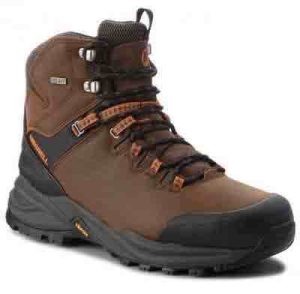 Clark Matis and John Schweitzer founded Merrell shoe line in 1981 after leaving their executive positions at the Rossignol Ski company to join forces with Randy Merrell, a designer and maker of custom boots with the aim of creating affordable, high-performance footwear.

The now reputable hiking footwear company began with a pair of custom cowboy boots before evolving to an industrial scale using a blend of American technological processes and Italian manufacturing techniques to create unique footwear.

The trio brought in their different contributions with Randy Merrell focusing on product designs, Clark handling productions and marketing, and John with the business connections.

With this, the company began its ascent into the already saturated footwear industry.

In 1986, Randy Merrell sold his shares and returned to his first love; making custom boots while the company hit a major milestone of 25,000th sold boots.

Not too long after this, Merrell footwear was bought by a sports brand based in Finland, Karhu. John Schweitzer moved with the purchase and went on to become the CEO of Merrell till it was sold again to the Wolverine in 1997.

Merrell’s manufacturing factories moved to Asia from Italy when it was owned by Karhu. This move contributed to a reduction in the cost of production that was reflected in the prices of the footwear.

Merrell footwear has since established its presence internationally in countries like the UK, United States, and Canada and the popularity of the brand solidified with the success recorded with the Jungle Moc, casual footwear that had nine million pairs sold as of 2009.

What similarities exist between the Danner and Merrell brands?

Despite the wide berth when it concerns the pricing of these brands, there are a few recognizable features that connect these brands apart from the obvious production of footwear and they include;

Merrells boots are known for their affordability and versatility, especially amongst campers, hikers, and people involved in outdoor activities.

A quick search on the internet for affordable outdoor wear will bring up this brand and this success is influenced to a larger degree by its price.

Apart from being in business for over nine decades, the sustainability and high quality of the Danner brand have contributed to its popularity, making it outlast other trendy brands.

Their wide variety of styles available to choose from is a factor that should be put into consideration too.

They are both American footwear brands

The Merrell footwear line is not only a favorite shoe company for hikers, it is owned by Wolverine World Wide with some lines of this footwear produced in the USA.

This is a similarity that is shared by the Danner brand which has been in operation since 1932, moving from Wisconsin to Oregon, supplied the US Military with footwear and to date still manufactures some of its popular models in the United States.

Danner shoe line might have a vast product line ranging from military to work and hunting shoes, one of the most popular lines is the high-quality hiking shoes produced by the brand.

The Mountain Light Danner boots are sturdy and fit for rocky terrains, especially when with heavy baggage.

Merrell is one of the most popular brands for hiking and other outdoor activities. The Merrell Moab 2 mid-WP is one of the popular styles that fit this purpose.

It has been mentioned time and again as the best budget-friendly hiking boot for lightweight hikers even though it is not so functional when using rough terrains and carrying heavier loads.

Comparison between the Darren and Merrell boots: which is better?

What are the differences between these brands that make one superior to the other and should guide your decision when considering which footwear to shop for?

As there are similarities, there are quite a number of differences that will affect your choice or preference and they range from style and overall quality to the build materials used in production.

This article will lay emphasis on some of these differences as you read further.

The Merrell brand runs true to size and is built on US sizing. They have half sizes and full sizes. If there are any issues with fitting, consider buying half size up.

Danner Company sizes its footwear according to the Brannock device and has US sizes.

Even though they run true to size, some lines tend to be narrower than others. An example would be the modern Mountain Light boots which are narrower than the original version.

It is important to get your feet measured at retail stores using the Brannock device before making a choice.

New Danner boots stretch after being broken in although not significantly so getting measured is the best option there is.

Without a doubt, the Danner boots are the costlier of the two and this is made up for by their durability and the quality of materials used in their production.

The Merrell boots are only popular for their affordability and despite the rave do not have adequate ankle support which could be disastrous when on a risky adventure.

Both boots are made of sturdy, durable, and water-resistant leather and the hide undergoes several other testing processes at Danner’s before production commences.

Danner boots make use of heavy-duty Gore-Tex lining, which is an advantage it wields over the Merrell brand.

It also has water-resistant properties incorporated into the leather that helps it withstand harsh weather conditions.

The soles are made of Vibram for durability while Danner has an additional foam layer in between.

The soles of Danner boots are replaceable and have a thread pattern that prevents mud and debris from sticking on while walking on rough terrain.

These outsoles also have a megagrip compound that makes these boots sturdy enough to brave any kind of terrain.

The Merrell boots are made with Vibram Roccia which does an excellent job at shock absorption and has cushioning which makes it quite comfortable with only a decent grip.

Danner boots have a wide variety of boots in different textures, styles, and colors, especially with their popular Mountain Light line. Merrell, on the other hand, has three basic colors; brown, black, and grey.

If you would like to be able to choose from a vast variety of shoes for different occasions and needs, then Danner boots would be the go-to brand.

These materials beginning from the hide go through multiple testing and a strict inspection process before manufacturing to ensure they are free of defects, unlike other brands.

The stitchdown process used in making Danner boots is done by hand to ensure durability.

On the other hand, the Merrell shoe line uses waterproof full-grain leather for the upper parts, just like Danner, Vibram rubber soles, and Tesivel 3-bar knit lining that ensures dryness but is not resistant to water.

This alone makes Danner the better choice when it comes to the quality of materials used.

Though these brands have their pros and cons, in regards to quality, Danner is the better shoe line and boasts of better materials and shoe-making techniques than their competitor, Merrell.

The difference in price is the only thing that gives the Merrell product lines an advantage over the former and this is not much of an issue, considering that they have different target markets based on their prices and individual preferences.

Based on the reviews, customers of the Danner Shoe line have much more positive reviews and have admitted to the durability of the brand which can not be compared with Merrells.